Saving Private Ryan (1998) – I mean, really… in many ways Saving Private Ryan is the sort of “ultimate” war movie. It has it faults, and it has its problems (it’s sort of bizarre seeing such a realistic depiction of the carnage of war feature so many characters who are leftovers from a cornier movie from the 1950’s). But, look, none of those minor quibbles mean much when you compare it to the horrifying and all-too-real-looking D-Day sequence that begins the film. It’s a totally straightforward look at an important battle and the price that was paid to win it. Saving Private Ryan is bookended with two war sequences, each of which are photographed brilliantly by Janusz Kaminski to put the viewer as an active participant without the luxury of any sort of disconnect between the blood and guts.

Also worth seeing: The Thin Red Line, Band of Brothers

Come and See (1985) – Come and See is one of the most heart-breaking depictions of war that’s ever been committed to film. Even more painful, the movie is told through the widened eyes of a child in Soviet Russia that’s been invaded by the Nazis. We see the transformation of Florya, the young star, go from a gung-ho participant in a militant uprising against the Germans, to someone who’s aged drastically in the span of only a few days. Come and See is not a pleasant film to watch, but yet it contains an elegant beauty to how it’s shot. It isn’t anything even close to representing exploitation. It simply is, and it shows war not as a glorified honor to be a part of, but as a literal vision of Hell on Earth.

Three Kings (1999) – David O. Russell’s Gulf War comedy meets Kelly’s Heroes seems to effectively have it both ways: It’s a serious mediation on the process of modern warfare, our involvement as a Police Action in global politics, and it’s also funny as hell and entertaining from the very to beginning to the very end. Normally, it feels like one or the other trying to exist harmoniously is a contradiction of themes, but Russell is an incredibly sure director and Three Kings knows exactly what kind of movie it wants to be and how to tell the story. George Clooney, Mark Wahlberg and Ice Cube were all destined to be stars, but this movie serves as a great reminder if you ever find yourself asking why. Apocalypse Now (1979) – Some movies feel more like a fever dream than an actual representation of reality. Apocalypse Now is about a journey to hell aboard a PT boat on a Stygian river to Colonel Kurtz’s compound. War in film has rarely been portrayed so chaotically and so meaninglessly–no one is entirely sure what’s being accomplished in their activities and the film makes no attempt to add meaning to them. Everyone involved is trapped in an impossible scenario that grows is madness as the story leads us to its inevitable climax. The music, the lighting, the disconnected narration by Martin Sheen all lend to make Apocalypse Now feel like one of the most awesomely hallucinogenic war movies ever made. It’s not an anti-war statement; it’s a movie trying to be as close to the truth as it can be. 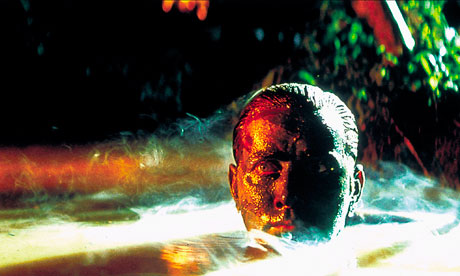 Also worth seeing: Platoon, Hearts of Darkness: A Filmmaker’s Apocalypse

Paths of Glory (1957) – When it comes to Stanley Kubrick waxing cynical about the futility and bullshit that is warfare, everyone goes to Full Metal Jacket. I would say Paths of Glory is Kubrick’s better, more elegant and even more venomous statement on it. Kirk Douglas stars in this WWI drama about French soldiers being tried for cowardice, facing a punishment of execution for their supposed crimes. He has nothing kind to say and the title itself is an ironic decry of the idea of sending innocent men to die over political and ideological disagreements. Kubrick has made more visually spectatcular movies, but he’s rarely made anything that feels this emotionally attached and meaningful. Also worth seeing: All Quiet on the Western Front