Anthology horror movies have always been hit-or-miss, but are always sort of irresistible for the Halloween season. They perfectly capture that feeling of sitting around a campfire and having a talented storyteller (or two, or three, or four) spin a couple yarns that ends in a somewhat predictable twist.

After Midnight is about as dumb as a movie can get, but it never makes the fateful error of taking itself too seriously–or seriously at all, for that matter. It’s a silly excuse to get people together to tell stories that are supposedly true within that universe, for the purpose of taking a college class that’s all about the nature of fear. The professor fakes a suicide in the middle of a class and everyone in attendance is just sort of like, “Eh, that was weird.” The professor does, however, make the mistake of scaring a stupid jock to the point of pissing his pants and he’s out for revenge in the wrap-around storyline from which all the other stories flow. 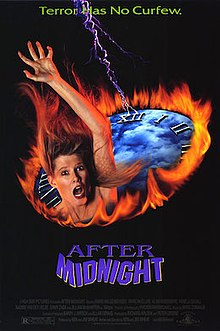 The stories all include a night of fear and generally some sort of ironic spin at the end. The first one is about a house that has a violent history and two stranded travelers that must survive its horrors and mysteries. The second story is about four teenage girls that encounter a crazy man and his loyal-but-awful canine friends that are out for blood. The third is something that only people alive in that era will remember: An answering service, when people not only didn’t have cell phones, but didn’t even, a lot of the time, have answering machines. A mad man, stalking a semi-famous celebrity, begins to terrorize the lone operator in the office over the night shift.

Somehow, everything comes together at the end, through the wraparound story that blends dream and reality and bends the edges of reality. Somewhat predictably, a deus ex machina is responsible for the film’s resolution and what happened may have all been a figment of a young girl’s imagination. Or, something much more sinister, like a loop of misery that will repeat again and again for the end of time.

After Midnight was written and directed by Jim and Ken Wheat, who would later go on to write the movie Pitch Black and create the character of Riddick. They were also responsible for one of the better Nightmare on Elm Street sequels, The Dream Master (the one that had that one Dramarama song everyone likes).

Among its cast are some people who would go on to be in much more successful projects like Marg Helgenberger or TV’s CSI and Pamela Adlon, the voice of Bobby Hill, Spinelli and about a million other characters in the animated world.

It’s not a great movie, but some of the segments (particularly the second one, the one with the crazy, evil dogs owned by that one crazy biker dude from Pee-Wee’s Big Adventure) are a lot of fun.  Sometimes it’s even almost scary.  The whole thing is pretty self-aware, but thankfully never too tongue in cheek, so it’s not some goofy movie that tries to seem above its material.  If you have a couple beers and it’s October, it’s a great waste of time.

After Midnight is available for streaming for those who subscribe to Amazon Prime.  If you have nothing else to do, there are worse ways to kill time.  It’s inconsequential Halloween fun.  I recommend it.