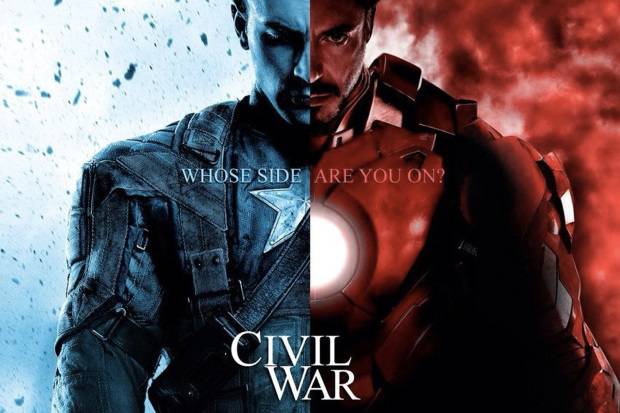 The U.S. Government, represented by Secretary of State Thaddeus Ross (William Hurt) has proposed that the Avengers not get involved in any conflict unless democratically and unanimously decided by a United Nations-like panel that has deemed their presence absolutely necessary, with all other options first exhausted.  Iron Man agrees, Captain America disagrees.  That is the center of conflict, and when Captain America’s old friend has been seemingly involved in an act of terrorism, he rushes to find him, despite becoming an active criminal and risking his arrest.

Somehow the movie brings in the usual cast of regulars while introducing a few new masked heroes:  Black Panther and, even though we’ve seen him on the screen time after time, this is the first time that Spider-Man is part of the MCU and his story has been rebooted.  Again.  But, this time, even though he’s only been glimpsed for a few minutes, Spider-Man has been infused with all of the fun from the comic books that had been missing from his movies.  He talks the right shit, has the right amount of enthusiasm and has a blast being a part of the titular civil war that pits Avenger against Avenger.

The Russo bothers directed Captain America’s previous “standalone” outing (that is, a non-Avengers-titled entry), The Winter Soldier to much success, and provide much of the same energy into story and action and will be helming the next Avengers movie, replacing Joss Whedon.  The Russo bothers have proved themselves as being more than capable of that responsibility.  The Winter Soldier was a surprisingly good movie and Civil War lives up to its hype.  I hope that they can continue this momentum moving forward, because they’re as committed to telling a gripping story as they are to showing large-scale action.

The Marvel Cinematic Universe tells stories of all kinds–small stories like that of Jessica Jones or Ant-Man, and large stories like the ones of the main Avengers cast–and each story that they tell is a part of a larger world-building that they’ve worked hard to achieve.  Everything has been building to Civil War and beyond, with little elements of the plot hinted at elsewhere, and to see those little bits of foreshadowing come to fruition has been wonderful to see.  While not always perfect, the MCU actually seems to care about the conflicts, the heroes and the villains.

My criticisms of Civil War are all pretty minor.  Reintroducing a conflict to pit Captain America yet again against Iron Man within the film’s climax seemed rushed, and a bit clumsy.  It felt very much like a “we have to do this” moment and didn’t feel particularly organic, even if the moment did struggle to a bit of gut-wrenching drama.  It just felt a bit labored.  What happens before and after that moment, I enjoyed very much, but in that actual pivotal twist moment, I was taken out of it a little bit.

And even though I’m sure he’ll prove to be a good character, film-wise, in his own outing, Black Panther in Civil War felt a bit shoe-horned.  Fitting everything else together for the massive showdown between all of the other characters involved had been easy because they had all had their own movies to flesh them out previously (except for Spider-Man, but Spider-Man is easy enough to recap within a few spare minutes), and it was just a matter of getting them together and letting them do their thing.  Black Panther is a bit more nuanced than that, with motivations that are pretty unique for a masked, seemingly-invincible superhero.  Giving him a story of revenge and an important piece of the story didn’t completely work.

I also look forward to hate-reading Breitbart News comments about having a black superhero named Black Panther and how it’s about some bullshit liberal agenda.

Civil War was a hard-earned hit.  It was a fantastically planned and realized movie, with excellent moments of pure mayhem and quieter moments of drama (and levity) handled with the same amount of expert care.  These are the kinds of action movies people want to see:  Movies with huge set-pieces with action that isn’t messy or hard to follow, with characters we actually care about.  In the climactic fight between Iron Man and Captain America, each punch landed mattered because we were invested in the story and wanted to see everything work out for these two heroes we’ve come to known in the course of all these years.

In one quick shot, Iron Man covers his face to protect himself from what may or may not be a certain death, and that shot packs an emotional punch to it because of the implication of betrayal and distrust.  It was a much more thoughtful and subtle shot you’d expect for a movie of this type, which is why a movie like Captain America: Civil War is so good.  It has these brief moments with a reaction shot that say more than dialogue could.  In a way, it reminded me of some of the better moments of a Mad Men episode, which is why it maybe makes sense that John Slattery turns up in a cameo role as Tony Stark’s dad.

I would absolutely recommend Civil War for anyone who’s already a fan of the MCU movies, and to anyone who’s only a casual fan of action movies.  It has the fun and imagination and plotting of the action movies that made us all fall in love with the genre.  And the explosions, too.  Lots and lots of explosions.