I’m not someone who believes every character in a movie has to be pious or imminently “relatable” or anything like that.  Sometimes the most fascinating characters are the ones who function on total amorality, bordering on sociopathy.  But a good rule of thumb for a horror movie is that the audience is most scared when they don’t want to see something bad happen to the main characters.  Rules are meant to be broken, sure, but in a movie like Don’t Breathe, it’s very hard for me to muster up sympathy for the kind of people who would break into a house and literally spray ejaculate across the floor.  And from a practical sense, who would leave so much semen at a crime scene anyway?  That’s just bad criminality right there. 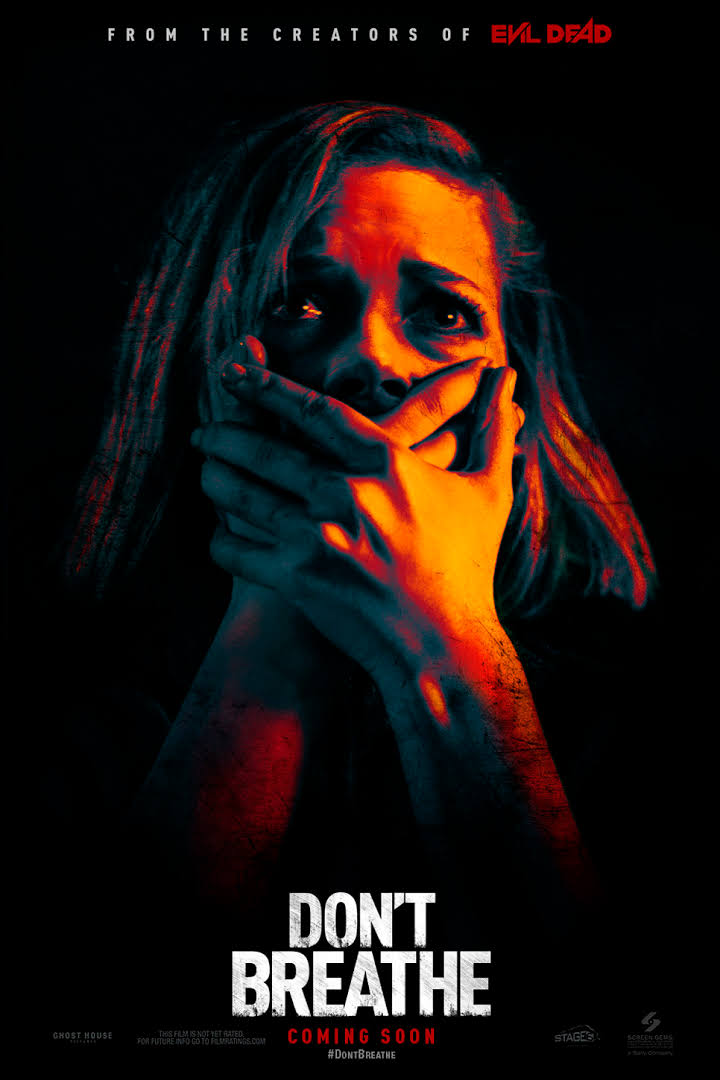 Don’t Breathe is a bad movie with a great gimmick:  It’s a sort of twist on the home invasion plot where, instead of siding with the innocent people inside the house, we have to side with the burglars.  And yet another twist:  The guy that these people are robbing is blind and, according to the logic of this movie, not only has heightened senses like sense of smell and hearing, the guy is more or less a superman and has surgeon-like precision with a firearm despite not having the most essential requirement to operate one.

Hiding and slinking through corridors of his home in a neighborhood of abandoned houses in Detroit, Rocky (Jane Levy), Alex (Dylan Minnette) and the terribly-named Money (Daniel Zovatto) must evade either capture or death at the hands of The Blind Man, played by Stephen Lang.  Even though the film is titled Don’t Breathe, which you would assume would mean that everyone must be very, very quiet lest the blind man hear their movements or shallow breaths, everyone stumbles through the action like a drunken elephant, making possibly as much noise as they can in one single movement.

The movie also features the most tenacious, mission-obsessed dog in a horror movie since The People Under the Stairs.

For those who haven’t seen it, a reveal happens in the final third of the film that I won’t spoil here, but it occurs specifically in order to make the main character burglars seem more sympathetic by making the victim of their home invasion a complete monster.  Not only does this reveal not make any sense if you think about it for more than five seconds, it allows the director to have even more semen in the movie.  Perhaps exhausted from the amount of blood that was in his remake of Evil Dead, Fede Alvarez has moved on to more taboo bodily fluids.

Rocky and Alex are also given moments of what’s supposed to be redemption in order to have our allegiance sway their way as opposed to the man whose house they’re robbing, but these moments are either so corny (Rocky wants to get her little sister to California which is a plot point I think I’ve seen in a million movies about the Great Depression—“Don’t worry, we’ll get to California one day!”) or under-developed (Alex doesn’t want to rob houses anymore, but then changes his mind in the very next scene) that I don’t know why the filmmakers even bothered.  The movie could have perhaps been somewhat interesting if we’d been asked to watch the actions of and root for monsters, but the attempts to humanize them and demonize the blind man just make the decision to subvert conventions a wasted opportunity.

The worst thing for a horror movie to be is boring.  Don’t Breathe is, fortunately, never boring.  It is paced well and never drags.  Once it hits the ground, it hits the ground running, so I will credit it with being at least committed to tension.  Its problem isn’t with not having enough to say, it’s that it’s dumb.  Somewhere within the goings on of Don’t Breathe is a nasty little thriller.  What we’re left with in this finished product, though, just isn’t very good.  It’s not terrible, and it delivers on what it promises, but it had the propensity to be something much, much more than that.  Stephen Lang is probably the reason to see Don’t Breathe, as he’s the only actor who seems to be aware of what kind of silly movie he’s in, and he chews scenery like there’s no tomorrow.  He’s clearly having a great time.