Never so vividly has a nightmare been captured on film.  Many films are surreal or nightmarish in quality, but often they wind up as looking like shoddy David Lynch imitators.  To truly capture a nightmare on film, the logic contained within the story has to be self-contained, but plausible, with surreality and reality intertwined seamlessly.  Eyes of Fire is like a fever dream that you can’t escape from.

According to IMDB, and I don’t know how accurate this info is, Eyes of Fire was made with a budget of $2.6 million.  Honestly, and even though many of the special effects are very well done, it looks a lot cheaper than that, but I feel like a lot of that has to do with the fact that no decent transfer of the movie exists anywhere on home media.  All we have is a fuzzy rip from a VHS (probably), which somehow aids in making it more mysterious–like it exists as a movie that doesn’t want to be seen, it have to be sought and looked for and stumbled upon in the deepest corners of the internet.

Directed by Avery Crounse, Eyes of Fire tells the story of witchcraft in Colonial America.  Preacher Will Smythe (that’s SMIGHthe, not quite the Fresh Prince), has been called out and caught as an adulterer and he, and a group of followers are ostracized from the community.  Following close behind is Marion Dalton, who is trying to retrieve his family from the preacher.

Along their way, they are attacked by Native Americans and find refuge in a valley that the Shawnee consider to be haunted.  For the time being, they are safe from attacks, as the Shawnee dare not enter the valley.

But soon, the settlers find that the land itself is evil.  Unhollowed ground.  When innocent blood is spilled enough times and it meets, it forges an unholy alliance and a devilish spirit is formed.  For all intents and purposes, it’s a devil that lives in the woods.

What ends up happening is an hallucinatory experience, like that feeling you get while on NyQuil during a fever, in between sleep and waking life, where the TV might be playing something and you forget which is which.  It’s terrifying on a completely understated level.  The movie isn’t soaked in gore, nor does it rely on shocks and jump-scares to alert the audience when they should be alarmed, like some version of a sit-com laugh-track.  Instead, the whole movie is cloaked in an aura of unease.

The movie has an R-rating for some nudity and maybe some brief violence, but this is one of those movies that would be perfect for a family horror flick.  It’s a well-thought costume drama with distinct sense of dread.  It’s perfect for watching on a lazy October night with the lights off. 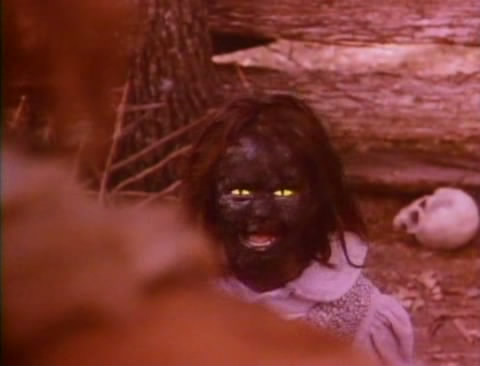 One of my favorite moments in the movie is when Marion actually sees, with his own eyes, the manifestation of the evil that lives in the woods.  The performance from the actor, Guy Boyd, is remarkable.  Very calmly, he sort of backs up to inform everyone else what he saw and though he calmly tells them what he saw, there’s something in his voice and the way he tells them that what he saw was without a single doubt, the most terrifying thing he’s ever seen, you believe him.  And he has no interest in trying to fight it or anything else, he wants to get the hell out of there.  Fuck everything else, fuck the supplies or food or whatever, it’s time to get the hell out of there.  Now.

Some of the special effects are… hopelessly cheesy.  They’re not necessarily outdated, because I don’t think these effects existed in any era.  They’re just misguided.  But, they lend a certain charm to the movie.  It felt like the director was figuring out things as he went, crafting a story and learning the language of film along the way, which made the essence of the story more pure.  It was a labor of love.

Cult film lovers live for movies like Eyes of Fire.  It’s completely unlike anything else out there today.  It’s wholly original.  It’s not always a great movie, and has its own glaring problems, and has storyline doldrums from time to time, but it sticks to its guns and is determined to tell a simple story about a mysterious evil.

Eyes of Fire is available in its entirety on YouTube.  If you have nothing else to do some 80-some minutes, check it out: