I’ve written before about Fargo, which is my favorite movie.  It’s an American masterpiece, combining everything that I love about film, storytelling and the human condition when put under pressure and studied.  This year, a television show under the same name, following similar themes, premiered on FX.  The two stories are completely different, standalone tales, dealing with twisted, serpentine plots in their own ways, but each dealing with a simple case of murder in a quiet community.  I wanted to compare the show to the film and celebrate both as great works of art.

Fargo, the television miniseries, begins in familiar territory:  A snowy landscape muffles the sounds of an all-too-familiar reality that lurks beneath a quaint little existence.  Even in the happiest of places, murder, blackmail and revenge can exist.  Much of the first episode seems to be telling the story of the movie in a slightly different fashion, but by the last ten minutes, it’s clear that show-runner Noah Hawley had a different story in mind than the one that the Coen brothers (Joel and Ethan) had told some 18 years ago.

Martin Freeman plays Lester Nygaard, a much put-upon insurance salesman who, at first glance, is not too much different than Jerry Lundegaard (William H. Macy) in the film.  Both are meek, cowardly men who find themselves in impossible situations involving accidental bloodshed and a world of tumult of their own causing.  They both see themselves as victims, Lester even proclaiming, “I’m the victim, here!” at one point.

Most importantly, they are both pathetic.  They are schemers and thieves and will do anything, anything to get what they want.  Both are sort of brilliant worms at times, able to squirm away and smirk at their own will to survive.

That’s where the comparison between the two end.  Jerry was never as sadistic as Lester is in the show.  Lester, though not as screen-memorable as, say, Walter White or Vic Mackey, he contains a cruelty that would make both of them sick to their stomachs.  Like the great anti-heroes of television before him, nothing he does is for the pure sake of cruelty, it’s an action that is justified to him and we can see the wheels spin in his head before he acts.  Though we can never condone what we see him do, we can understand his logic.

Deputy Molly Solverson stands in a Marge Gunderson-like character who is smarter than she outwardly projects to those around her and has a natural talent for policework.  Though she often finds herself knee-deep in trouble, disturbed and saddened by what she sees deep inside some people, she rarely cracks under pressure.

Molly, unfortunately, is one of the series’ weaker characters and it’s a shame.  She represents probably the only real positive female character in the entirety of the series, but she never carries herself in the way that Police Chief Marge Gunderson did in the film.  They’re not necessarily compatible characters, and neither are Lester and Jerry, but there was a certain command and strength missing in Molly.  Molly is newer and greener to the field than veteran Marge was, and she does great work at following clues, but her character’s motivation and trajectory seemed a bit too much like a writer’s fabrication of a person’s motivation.  She’s too determined to solve the case.  I’ve always been bothered by the cliche of a cop in these types of shows who spends sleepless nights pouring over old case files and no one, no one, will listen to them before it’s too late.  Marge was the perfect character.  She never seemed to discuss the case outside of work, preferring to come home and enjoy her husband’s love fully without the work chit-chat that is so dark and dour.  Maybe Molly will become a bit more like Marge now that she’s earned the respect that she deserves. 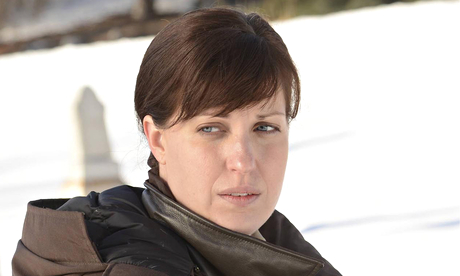 Billy Bob Thornton as Lorne Malvo plays like a cross between Gaear Grimsrud and Anton Chigurh, complete with the silly haircut that the Coens seem to love saddling their psychotic villains with.  It was nice to see Billy Bob Thornton getting a great role to play again after having seemed to flounder for so many years following the release of Bad Santa.  When BBT gets a role to really sink his teeth into, it’s a marvel to watch.  Some actors are just fun to watch.  Watch him as he dances with playfulness and sadism and watch eyes flicker between those emotions with such effortlessness.  In the interrogation scene in which he puts on a pair of glasses and pretends to be someone else entirely, you can see the giddiness of the actor, and of the character, well up and almost explode outward.

I’ve read other people’s interpretation that Lorne Malvo is Satan in human form.  As a literal sense, obviously I don’t agree with that.  I think he represents Satan in a way that he moreover represents Evil with a capital E.  Fargo, the miniseries, plays with the Coens’ many tropes that they’ve established over the years in their films, and he’s a representation of Evil along the lines of John Goodman in Barton Fink and M. Emmet Walsh in Blood Simple–someone who seems to be superhuman, but once you strip them of their Evil, all that remains is the blackened shell of a pitiful human.

Fargo, the miniseries, seems to be a lot more preoccupied with theology than the movie did.  The movie represented an irreligious world, for the most part, where people are mostly kind, but evil lurks just beneath the surface.  The message I got from the movie was that good will generally triumph over bad because the good people in this world keep the globe spinning.  The miniseries, however, seems to be a bit more cynical in that regard.

The common thread tying the world of the movie to the world of the miniseries is the bag of money that Steve Buscemi’s character buried in the movie shortly before being chopped up with an axe and fed into a woodchipper.  A down-on-his luck man in the show finds this money and creates an empire of grocery stores.  When he begins to think god may be punishing him for his hubris, he returns the money from whence it came and is rewarded by a freak occurrence involving raining fish and the death of his only son.  Noah Hawley is certainly the god of the show, controlling the fate of the characters, and decided that his decision to return the money should be punished, for whatever reason.  This isn’t bad storytelling at all, it just strikes me as cruel.

Lorne Malvo, unlike Gaear Grimsrud, is deemed by the show to be too monstrous to be captured, and is instead shot and killed. Lester Nygaard, unlike Jerry Lundegaard, is not captured by the authorities.  Both attempt an escape that is perfectly pathetic and true to the character, but whereas Jerry was caught and cuffed, Lester runs out onto a frozen lake that is thawing as the warmth of Spring rolls in and falls to his icy doom.

It was interesting to watch something that was somehow more cynical and nihilistic than a work created by the Coens, but it’s not rare for them at all to slip a glimmer of hope into a situation that seems completely shitty.

The supporting cast of the series was incredible.  Bob Odenkirk, who’s almost always my favorite, was great at being the bad boss.  He’s the newly-appointed Police Chief and just terrible at what he does.  He’s not terrible because he’s a jackass, like so many other movies or shows would have had him be.  No.  He’s a nice guy and probably actually great at lots of things, but he just doesn’t have the disposition to suspect someone he knows.

Keith Carrdine isn’t given a whole lot to do, but in the scene he shares with Billy Bob Thornton at the diner, I dare you to watch that without squirming uncomfortably.  It’s brilliantly played by both actors and they play off of each other so well.  It’s one of the best character-to-character dialogue scenes in all of television to come out so far this year.

One of the hardest things to do in the medium of film or television is to portray suspense in a realistic way.  One false move and whatever you’re creating will seem synthetic.  Motivations have to seem real.  Real-life tension is unbearable.  Fargo, the series and Fargo, the movie both have scenes that have made me want to look away and bury my head and never look back at the television screen again until I’m sure everything will work out okay.  In the show, it comes when Lester beats his wife to death with a hammer (ugh, just the look on her face when that thin trickle of blood turns into a drooling flow).  In the movie, when Grimsrud reaches over Carl (Steve Buscemi) and executes the nosy State Trooper.

This isn’t the first time that a proposed television show based on Fargo had been attempted.  In 2003 a pilot had been filmed starring Edie Falco.

As of now, it’s unclear as to whether or not there will be a second season of Fargo.  If there is, it will be another standalone story, akin to American Horror Story (also FX) or True Detective.  In a way, I hope that there isn’t.  I like the tightly told narrative we got this year.  I don’t necessarily want to see that well dipped into too many times.  But, then again, if there were to be a second season, I certainly wouldn’t object and I would watch it with much glee, because from what I’ve seen, Noah Hawley is a wonderful storyteller with much to say.

2 thoughts on “Fargo Vs. Fargo”