Russ Meyer is one of those directors whose movies work as a window into their mind and psyche.  Watching something like Faster, Pussycat! Kill! Kill! works as a means of discovering what it is, exactly, that turns him on.  And the answer is glaringly obvious after the first thirty seconds:  Big tits and powerful, intimidating women.

Tura Satana stars as Varla, a bloodthirsty go-go dancer with a penchant for fast cars, with quick money on her mind.  Rosie (Haji) and Billie (Lori Williams) are her partners in both dance and in crime.  The three of them together form a trifecta of too-cool-for-school wickedness.  They don’t care who they have to hurt or what they have to do to get what they want. 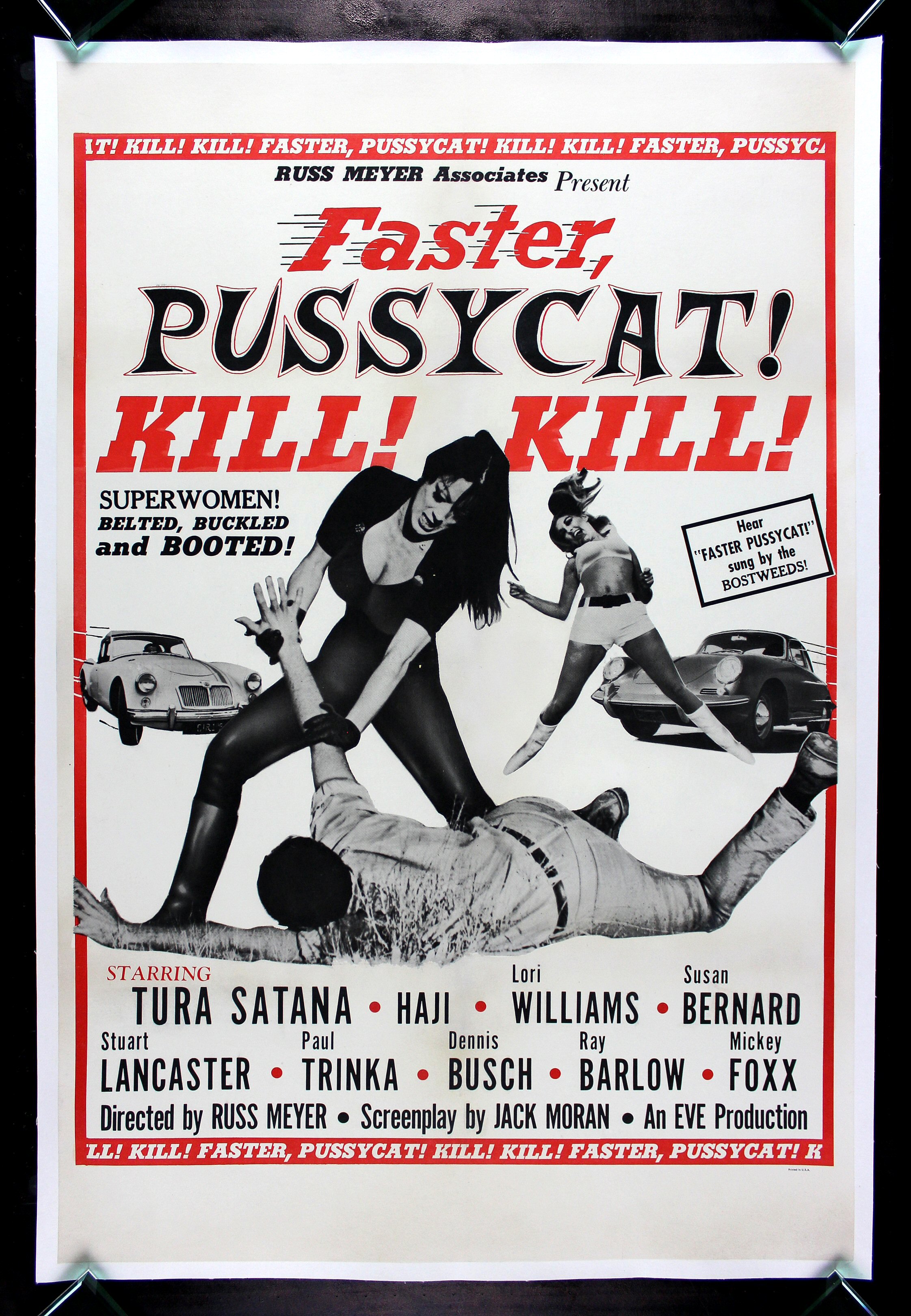 The film begins with the three of them dancing, harsh lights on their bodies with no visible background, intercut with men in the crowd shouting like animals, and a narrator telling the viewing audience, “Ladies and gentlemen: Welcome to violence.”  This ends up being an apt warning, as the trio ventures out to the desert for a quick race that escalates to violence rather quickly, a man winding up dead and his underage girlfriend (Linda, played by Susan Bernard) kidnapped by them.

Linda spends the rest of the movie barefoot and in a bikini.  Susan Bernard was apparently terrified of Tura Satana, which adds significantly to their on-screen relationship, as a prisoner of the imposing presence of Varla.

Varla, Rosie, Billie and their prisoner Linda soon find themselves caught up in a scheme to rob a crippled old man and his learning-disabled son of a vast fortune that they apparently have hidden in their ranch.  The three women attempt to woo them, putting the young Linda front and center, but find themselves neck-deep in even more violence, mayhem and car chases when the old man ends up being just as psychotic as they are.

Russ Meyer is a rare example of an auteur.  There are others, of course, someone whose work is instantly recognizable.  You turn on a movie and just by watching a few quick frames flash by, or the way it’s cut, or the specific kind of music used, you know exactly who’s responsible for making it.  Martin Scorsese is one example of an auteur… someone who’s been oft-imitated, whose work can be exaggerated by something as simple as the juxtaposition of doo-wop music and extreme violence.  Wes Anderson, and the oh-so-precise way he frames his subjects with a perfect color palate and an obscure B-side from a lesser-known pop band from the 60s or 70s, is another example.  And then there’s Russ Meyer, with his low shots of undulating, mountainesque breasts and the powerful women who flaunt them–and always, always shot incredibly well.

The thing about trash cinema is that it only works if it’s shot well.  There’s always the ironic appreciation of badly-made movies, but for something to be truly special in the world of trash films and cult flicks, it needs to be well-made.  Russ Meyer was technically adept at the filmmaking process, and his works reflect that workmanship.  He worked fast and for very little money, but the final result looked like something that cost significantly more than the actual budget.  His black and white cinematography was always crisp, with gleaming whites and pitch-black shadows.  His color cinematography popped with a wide variety of psychedelic flourishes.

Faster, Pussycat! Kill! Kill! has a legacy of influence since its release.  Everyone from Quentin Tarantino to John Waters has sung its praises.  There’s been talk, time and time again, of remaking it, but why bother?  It was a movie unique to a specific time and place.  It had to be made right at that time when censorship still ruled Hollywood, but things were beginning to let up.  It was that in-between phase where you didn’t have to be as staunchly restricted as Casablanca, but the freedoms of sex and violence were by the likes of Sam Peckinpah were only three years away.  You end up with this strange hybrid film that’s technically family friendly, but the intent of the film is to titillate, arouse and thrill.

I feel like, also, whenever Faster, Pussycat is brought up, there’s the inevitable debate as to whether or not the film is feminist or misogynistic.  Is it in praise of women, or is it exploitative of them?  Well… why can’t it be both?  Art should be a complicated thing, and it’s a common misconception that it has to be in good taste.  I see it as having it both ways.  Russ Meyer clearly had issues with women, he loved them and he feared them, and that duality has been captured by him time and time again.  But, most of all, the man loved tits.