Very rarely are there directors or filmmakers that I would outright label as an “auteur.”  An auteur, I think, is someone who has their work oft-copied and oft-imitated, but has such an original visual flare that you can instantly recognize the real deal from a forgery as long as you’re pretty familiar with the real work from the master.  I would consider Martin Scorsese to be an auteur, especially in his early work.  Wes Anderson fits the bill–you know you’re watching a Wes Anderson movie just by a single frame and its composition.

To that end, I would definitely label Guillermo del Toro as an auteur. His visual flair is dark, gothic… macabre, I guess.  His visuals are reminiscent of Tim Burton’s best work, but Guillermo del Toro is unique in how he tells his stories.  His obsessions are evident throughout (the man loves intricate machinery and gears).  Ghosts, scarabs, things that go bump in the night:  In a story told by del Toro, these monstrosities, these so-called freaks are rarely the villains–it’s the humans we have to be afraid of.

Working from a script he himself had written as far as back 1984, Guillermo del Toro’s first film, Cronos, is spin on the classic vampire story.  An insect, housed within a golden device, bites Jesús, played by Federico Luppi and crazy, disgusting, awesome shit goes down.  Del Toro’s first movie is rough around the edges, but contains so many of the elements he would utilize again and again throughout his career (and actors Luppi and Ron Perlman).  It is always beautiful to watch and never, ever boring.  It’s a hell of a debut feature and one of the more entertaining vampire films of the 1990s.

Mimic is the other monster-in-an-unusual-place movie from 1997, so sometimes I confuse it with The Relic.  Both were dumb, fun and entertaining but… meh.  Mimic is probably the better of the two and has a little bit more imagination, aided strongly by del Toro’s visual mastery, but there’s not much to link it to him directly.  You could tell me just about anyone had directed it and I’d believe you.  Del Toro has apparently originally wanted the cockroaches in the plot to be scarabs, but was overruled by the studio because roaches make more sense.  While true, his visual obsession was being neutered, and that wasn’t the only element he was overruled on.  Basically, Mimic was a for-hire job.  And for a for-hire job, it’s really not bad.  A director’s cut also exists which is a bit truer to his original vision.

The Devil’s Backbone is my favorite Guillermo del Toro movie.  It has everything:  A spooky ghost story, a brilliantly plotted melodrama, genuine emotion.  Every time I watch it, I have a new favorite scene or a new favorite shot.  The cinematography, care of Guillermo Navarro, is beautiful and haunting.  The performances, all of them, are excellent.  While Cronos was his first original work, The Devil’s Backbone is the first time he felt really, really confident behind the camera and just knocks it out of the park.  There’s not one single frame I would leave out or one line of dialogue that feels out of place.  I love everything about it.

I feel like I should have really liked Blade II because I, obviously, love the work of Guillermo del Toro and I really liked the first Blade movie (though John Carpenter’s Vampires came out the same year and that’s the vampire flick of 1998 I prefer), but it just felt empty to me.  The CGI is woeful–intentionally so, I guess, but I suppose I missed the point–the visuals are okay, nothing special and everyone involved in the production and cast seems to be treating Blade II as a shitty job that they have to do for a paycheck.  Del Toro hasn’t said anything about it being a terrible work experience or anything, so I assume he enjoyed the finished product, but it just doesn’t do it for me.  I wish it did though because just think about it:  Blade II, directed by GDT… it sounds awesome.  I’ll just prefer remembering it as a great idea.

Ron Perlman is the man.  He’s a screen presence that makes me happy whenever he appears.  You know how there are just some people who pop in a movie and you’re instantly glad?  That’s Ron Perlman for me.  He looks like a meaner, grungier Tom Waits and has an awesome voice to boot (War… War Never Changes).  I couldn’t imagine anyone else in the role of Hellboy, the comic creation by Mike Mignola.  He’s so effortlessly cool and kicks ass.  He floats the whole movie.  While I think Hellboy was a lot of fun, there was something that just seemed to be missing.  It felt too heavily-plotted, if that makes sense.  There was just so much information that needed to be squeezed in and there wasn’t enough room for del Toro’s imagination to fully flourish.  Still, if you’re in a hotel room somewhere, sometime and this comes on TV and you’re bored, fuck it, watch Hellboy.  You’ll have a blast. 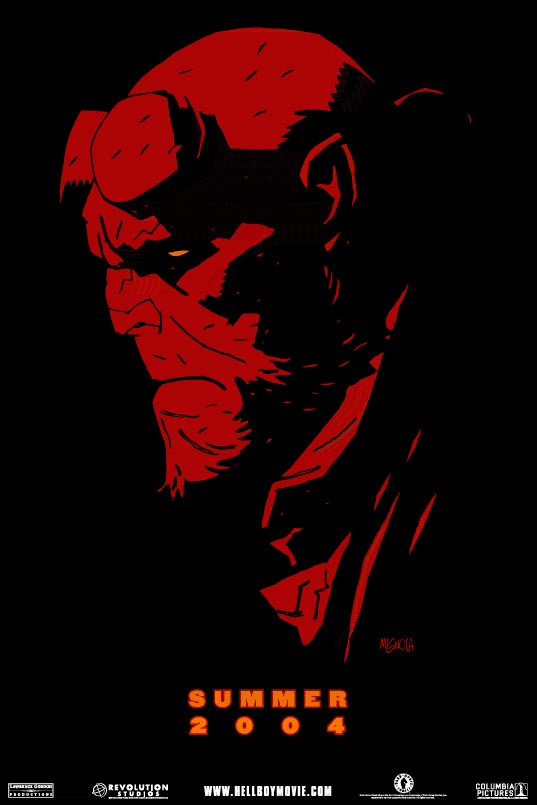 While The Devil’s Backbone is my personal favorite Guillermo del Toro movie, Pan’s Labyrinth is probably his masterpiece.  It’s the companion-piece to The Devil’s Backbone and explores similar themes like the Spanish Civil War, fascism, man’s inhumanity man–all juxtaposed with this supernatural phenomena, for the purpose of asking us:  What’s really worse?  Us, the killers and rapists of our own kind, or them, the scary-looking traditional monsters?  The main character, Ofelia, is perfect as the audience’s stand-in to explore this world of ugliness, curiosity and literal magic.  Vidal, the villain, is goddamned terrifying.

Pan’s Labyrinth represents a master at work.  He has full confidence in what he’s doing and can manipulate the audience into screams and laughter in the same shot.  Truly, one of the best films of its decade.

Hellboy II contains all of the fun, originality and rampant imagination that I wish had been present in the first one.  In a world where sequels are seldom good, Hellboy II is about three times better than the original.  The special effects are some of the best committed to a mainstream film production.  Hot off the success of Pan’s Labyrinth, Guillermo del Toro was allowed much more creative license with this big-budget project:  More elaborate and traditional effects without a reliance on CGI, Doug Jones finally receives an acting credit and his lines are his own and not dubbed by David Hyde Pierce (but seriously who doesn’t love DHP?); and now that the backstory has already been established, everything we get to see is pure madcap creation, just unbridled creation.  Hellboy is given more time to shoot the shit with his colleagues and the ride is just more well-tuned.  If you didn’t like the first Hellboy I feel confident you’ll have a great time watching the sequel.

However you feel about Pacific Rim probably depends entirely on how you feel about the Kaiju genre in general.  Do you have a blast watching Godzilla kick the shit out of other monsters and knock over a few buildings while they’re at it?  Or, do you watch those kinds of movies and feel simultaneously bored and overwhelmed with the amount of devastation being thrown at you?

Me, I fit into the camp of people who prefer monsters of the darkness, not lumbering giants.  I just get no fear from the beasts who level entire cities underfoot.  I did, however, love the original Gojira but wanted to fall asleep watching the 2014 remake.  As far as “giant robots fight giant monsters” plots go, it’s probably the best you’re gonna get.  The characters are all pretty much likable and a whole hell of a lot of monsters get punched in the neck and kicked in the groin.  Also, Charlie from “It’s Always Sunny” is a prominent cast member, so there are worse ways to waste your time.

Mama and The Orphanage, two good productions of his.  Mama had a great darkness to it and didn’t feel the need to wimp out at the end, but The Orphanage is the shit.  It is so, so great at achieving that feeling of just PURE atmosphere.  It’s really great.