Hardware is one of those movies I wish I had seen as a kid.  It’s derivative, yet wholly unique.  It’s simultaneously surprising and predictable.  That I saw it as an adult who’s almost 30 is sort of a shame, because it’s a move that’s perfect for teenagers–and I don’t mean that as an insult, I mean that as a high complement.  It’s like ideal young adult fiction, forged first as a movie instead of as a novel. 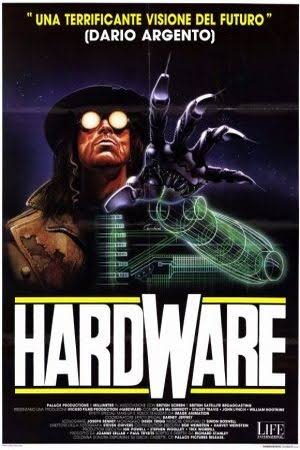 It stars Dylan McDermott as Moses, who’s one of those actors who can surprise you when he pops up in something good and really acts the hell out of it.  He does that here and he’s done it elsewhere.  He’s sort of doing a “Man With No Name” type performance, but with a little bit more heart and nuance that you would expect.

Moses is a trader of junk for money and eeks out a living in a post-apocalyptic wasteland.  The world is awash in a hideous orange color and occasionally we hear expository “narration” in the form of a wise-cracking D.J. voiced by Iggy Pop.  Upon finally watching this movie, it’s a lot clearer to me where the Fallout series got some of its inspiration.

A piece of robotic equipment is found by a nomadic wandered and bought by Mo, who brings it home as a gift for his girlfriend, played by Stacey Travis.  She decorates the robot’s head and then it reassembles itself from metal sculptures found around her apartment and hooking itself to the apartment building’s power supply.

From there, the movie turns into something of a nonstop action movie, borrowing from both Alien and Aliens, with some Terminator thrown in for good measure.  But Hardware isn’t some James Cameron clone, because it’s not just a sheer special effects spectacle or simply action-driven.  There’s a world that Hardware exists in which is fully realized.  It’s a comic book world with great set design and cinematography to capture its essence.  Most of the movie’s action takes place in a single location–an apartment complex–and seems like something of an inspiration for the new Judge Dredd movie that came out a few years ago.

Richard Stanley seemed poised for greatness after Hardware was released, but after a fiasco of a production that happened when he joined what would eventually become the trainwreck of a movie The Island of Doctor Moreau, he disappeared into obscurity.

Hardware isn’t a great movie, but I don’t think it ever had any false pretense about what it is.  It knows what kind of movie it is, and for that it’s a lot of fun.  A lot of quality craft went into the making of it, and it’s fun to watch.  It takes place in an ugly future with despicable people, with twists and turns through a plot that never wants to let up.  It keeps moving and moving until the finale, where you finally have some time to breathe and then actually ponder the significance of the design of the seemingly unstoppable robot.