High-Rise is one of the most imaginative movies I’ve seen in a long time, a movie with a distinct opinion about class and about cruelty, and it says it in a unique way.  The plot, if you will, of High-Rise is of a building in an indeterminate time and setting.  It may be the 60s, it may be the 70s, and it may be some sort of dystopian post-apocalyptic wasteland.  We’re never too sure.  What we do know for sure is that in this high-rise building, people are tiered by class:  The poorer people at the bottom, the richer people at the top.  And there’s immediate friction between the classes.  Madness boils just below the surface and the inevitable that happens is so inevitable that the film begins in medias res, showing the logical conclusion before we can even predict it as a possibility. 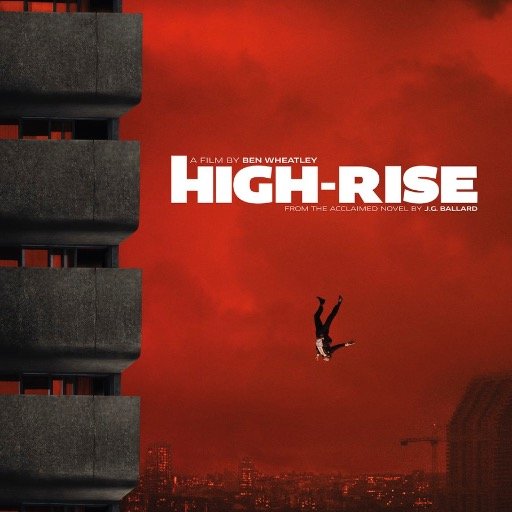 High-Rise is one of those movies that I admire endlessly while personally enjoying lesser so.  The craftsmanship that went into the production is top-notch.  The costumes, the sets, the cinematography and the culmination of those things is to be absolutely admired.  It creates a look that borrows from a million places but never ends up looking derivative on its own–it’s not some pleasant-to-look-at Wes Anderson clone.  It’s something else.

And the direction (not just the direction of the camera or the actors in front of it, but of the plot itself) never pulls any punches or needlessly explains something to the audience if the movie and its director (Ben Wheatley) and its screenwriter (Amy Pulp) figure that the audience is smart enough to figure it out.  They seem to believe that if we want to know certain answers badly enough, we should just read the novel by J.G. Ballard.  I wonder, at times, if reading the novel was a prerequisite to watching the movie.

At two hours, the film felt too long; however two hours didn’t seem to be enough time to tell the story as fully as the filmmakers wanted to tell.  It’s a strange contradiction to somehow be both too long and too short at the same time.  But, watching this movie, nothing seems to be out of the question.

One thing that has always bothered me in a criticism of a film is, “It was so weird!”  Like, really?  You didn’t like Twelve Monkeys because you thought it was too weird?  But here, I might be inclined to, against my own better judgment, just say that High-Rise is possibly too strange for my tastes.  A movie like High-Rise thrives on being polarizing.  It wouldn’t have much of an impact of people seeing it decided that it was fine, or just merely okay.

In the madness of the story, I feel like certain storylines that appeared and asked interesting questions and then totally vanished could have been excised and left on the cutting room floor.  There were about ten different movies happening in High-Rise and the makers just needed to fine the one that they were most interesting in telling.  Was it the dark comedy of class warfare that dissolves into madness?  Or was it the dark drama about the sudden, unexpected eruption into violence?  Both are good, but don’t necessarily coexist.  Maybe that’s the point?

Everyone in the cast is good.  Tom Hiddleston has never been better than I’ve seen him here.  I think this was my favorite of his performances (next to maybe Only Lovers Left Alive), it’s just a shame he wasn’t in a better vehicle.  Jeremy Irons was… he was Jeremy Irons.  The other unknowns in the cast held their own against veteran actors capably.

High-Rise is by no means a bad movie, but not one that jibes with my tastes.  It’s a movie I admire very much, but feel disappointed with because it had a lot of potential that didn’t come together.  The unpleasantness of what finally happens in that tower in the sky may have something to do with it, but unpleasantness by itself can be made palatable with a more focused vision.  A movie that really plumbs the depths of human depravity deserves something less tangential, and more substantive.

One thought on “High-Rise”