Melodrama only works when the plot, characters and motivation all make sense. When you have very serious things, very emotional scenes all happen just because, you wind up with a brilliant piece of unintentional humor.  The Slap is one of the most self-serious and spectacular failures I’ve seen in some time.  It’s such a panicky tale of things that can possibly go wrong and the horrors of adulthood that it’s a wonder if the writers of this pilot episode have ever stepped outside or had human interactions.

Whenever I see a story like this, I always give the writers the benefit of the doubt and assume that they are extraterrestrials assigned with the task of creating a piece of fiction to human specifications as best they can.  It’s not their fault that they failed, they’re just not from here. 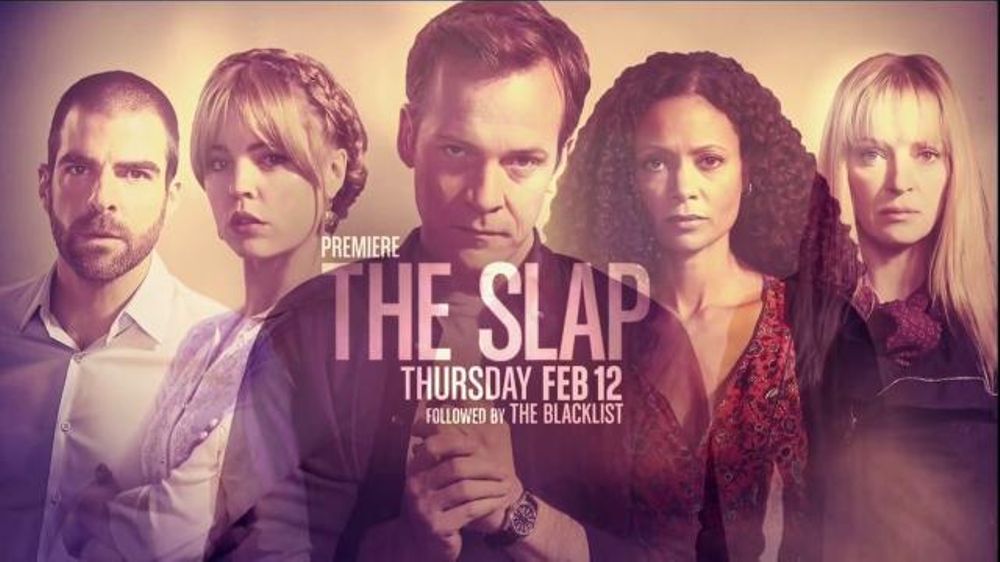 For some reason The Slap is narrated.  Poorly.  The narration is often accompanied by some soft jazz and fuzzy close-ups with a shallow depth of field that make it seem like you’re watching a really bad car commercial.  When it turns out that the show did not, in fact, go on break and you’re actually watching the damn thing, it’s jarring.

This episode, the pilot, focuses on the character of Hector, played by Peter Sarsgaard.  Since it’s not enough that one thing fucks up his party, it’s necessary that he also be involved in a potential affair with an underaged girl.  This relationship makes literally no sense.  The chemistry between them is nonexistent.  She’ll groan something between mumbling lips and a scratchy voice, as awkward as can be, and Hector will giggle like a school girl and then, five minutes later, gaze out the window like he wants to die.

At one point, the narrator even tells us that he considers the affair even if the end result is, “loneliness, despair, suicide…” and Hector’s all, “Eh, I’m gonna go for it.”  It’s… the worst thing.

It really helps if you’re watching a show like this and not every single person is someone you would want to actively avoid.

Peter Sarsgaard is plenty bad, even when he’s not having some bizarre face-molestation fantasy about a young girl, but Thandie Newton, as his wife, spends about 80% of the time on screen either huffing or puffing.  Even when she’s told that his parents have just paid for a vacation to Greece, her response is that she can’t take a vacation now.  No explanation is really given.  Is it a work thing?  I mean… work allows vacation, and you guys are rich (REALLY rich), so I can’t see that being a problem.  She acts like being given a trip to Greece is like being given a plate of rotting meat.

If a trip to Greece is the worst thing to happen to you, then your life is a privileged shithole concocted by a terrible writer.

Zachary Quinto plays Harry, the guy who eventually does the titular slapping of the kid.  He’s Republican.  You can tell, because just about every line he says is some over-the-top conservative shit that would even make Rush Limbaugh go, “Whooahhhh, hold on, now.”

Melissa George and Thomas Sadoski play the parents of the little shit who gets hit and they’re quintessential liberals, so much so that for every bit that Zachary Quinto’s character goes overboard, their shtick would make Utne Reader subscribers blush.

Now, the kid.  Hugo.  Throughout the course of the party everyone is gathered at (for Hector’s 40th birthday), he destroys some pretty decent records, carelessly tosses on iPad on the ground, destroys a good chunk of a badass-looking rose bush, kicks no less than two adults and swings a bat at another kid.  By the time he got slapped, in real life I think everyone would have let out a sigh of relief.  But, because The Slap such a badly written soap opera, everyone treats it like Zachary Quinto shot the goddamn kid in the stomach with a revolver.

Hugo’s parents swoop him up and call the slapper a monster and he hisses back, “Lazy hippie!”

These guys are always looking to get in trouble.  Earlier, Thandie Newton was huffing and puffing about the trip to Greece and took a piss with the door wide open.  I don’t give a shit if it’s a private bathroom in the master bedroom, close the fucking door.

I don’t have the strength to watch on and see what terrible plot lines are stretched out over 8 episodes, but this first one is comedy gold.  It’s just strange because all of the acting talent involved does their best.  They give it their all!  They really try!  But… fuck.  What can you do?

2 thoughts on “I can’t believe I watched this: The Slap”