Never have I experienced such a disparity between how I feel about the works of someone as opposed to how I feel about the creator of those works.  I really like John Waters as a writer, as a person and as a general personality.  I do not like his movies so much.  If I met him and he were to actually give a shit about my opinion, I think I would say something like, “Your contribution to film has been tremendous!  I think, in all honesty, the medium and the world itself is better for their being in existence.  I, however, find most of your work to be completely repulsive, amateurish and difficult to watch,” to him.

And I mean it.  I think the works of John Waters were needed to shake things up.  The world of filmmaking sometimes takes itself so seriously that you need a film like Pink Flamingos, whose most popular virtue is the fact that Divine, the dressed-in-drag star of the film, actually eats dog shit, to make a ton of money at the box office, somehow.  People flocked to his movies to laugh, gag, feel bad about themselves while watching, and then feel good about themselves afterward for being so comparatively well-adjusted than the characters they just had to spend so much time with.

Trash has long been considered to be art, provided it’s trashy enough, so it’s not surprising that Janus Films (who are usually known for the works of Kurosawa and Bergman and all those typically “great” films we imagine) would choose John Waters’ sophomore feature, Multiple Maniacs, to be restored, remastered and shown across the country as a sort of prestige work. 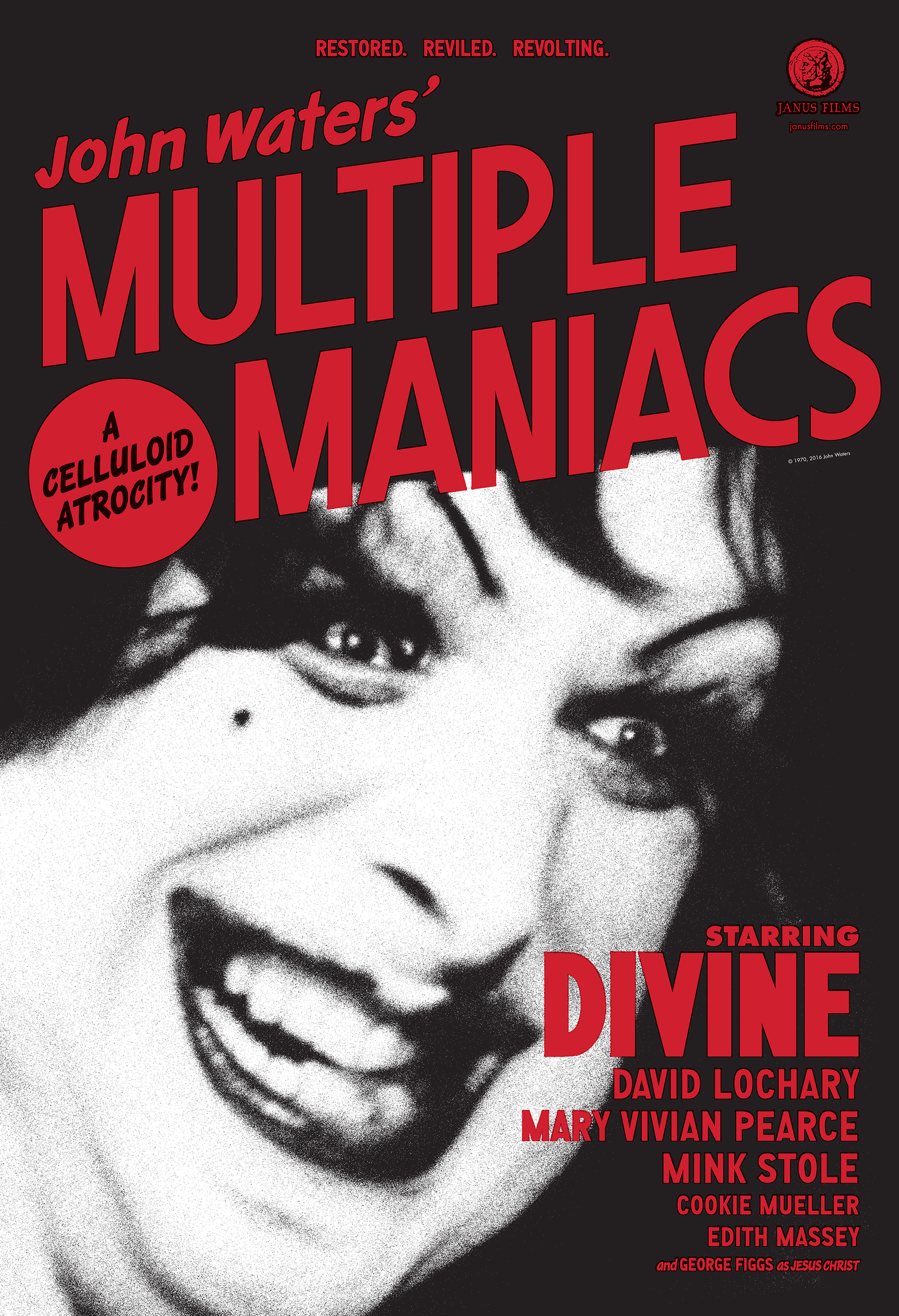 Multiple Maniacs was shot in 1970 on black and white 16 mm and I suspect that until now it never looked this good.  It really does look great.  The restoration process allows the beauty of the film to shine through while making sure the amateurish flourishes that make up the film’s charm are completely intact.

How does one really sum up a film like Multiple Maniacs?  Well, it stars Divine as Lady Divine, the main attraction and murderously-insane member of a traveling sideshow.  The sideshow features a man withdrawing from heroin, a man eating his own vomit, lesbians, weird sex… and squares from the town throw their money at them to see such acts of depravity.

When the gawkers, the voyeurs who point and laugh, go to see the final attraction–Lady Divine–the net comes down on them and they’re robbed for everything they’ve got.

Mr. David (played by David Lochary) is Lady Divine’s current boyfriend and he’s cheating on her with Bonnie (Mary Vivian Pierce).  Mr. David tells Bonnie that Lady Divine is crazy, that she’s obsessed with killing, and killing cops in particular.  So, in order for him to leave her, they must kill Lady Divine.

Meanwhile, Lady Divine hears of Mr. David’s impropriety and, on her way to go kill him, is raped by a glue-huffing bearded lady, then engages in lesbian sex inside of a church with a rosary up her ass (with a very young Mink Stole), all inter-spliced with a low-budget reenactment of the Passion of Jesus Christ.

At the end of it all, everyone ends up dead, and Divine is raped by a giant lobster for some reason.

Out of the early works of John Waters, I probably like Multiple Maniacs the best.  It’s shocking, yes, but the shocking nature of the movie doesn’t seem to be as in-your-face as some of his other stuff.  It doesn’t seem to determined to drop people’s jaws.  It seems more sincere in how outlandish it is.  It just is outlandish.  It’s not trying to be.  And, for all its murder and rape and disturbing goings-on, there really is something charming about it, possibly underneath the film’s surface.  It just seems like good fun.  It’s cathartic.  It’s… I don’t know, it’s just a movie that feels like the best way to get over the fear of a world that’s capable of such terrible acts is to look at those acts and to laugh at them.  It doesn’t revel in depravity, it seems to laugh at it.

When it comes to the works of John Waters, I really find myself more drawn to his mainstream movies (Cry-Baby, Hairspray).  There, I feel like he’s having the kind of fun he’s clearly having with all of his works that made him “The Prince of Puke” but this time he’s inviting the audience to have a good time, too, not just a select group of people that howl with laughter over the idea of someone licking all of their enemy’s furniture.

Just like anything of his early oeuvre, Multiple Maniacs is going to be divisive.  You’re either going to find something to like about, or you’re going to hate it.  But, like I said before, I think the filmography of John Waters is important to the overall history and evolution of film.  Without his boundary-pushing, who knows how many doors for future filmmakers would never have been opened?  I think his voice is an important one, it’s just that, for the most part, I’m not interested.  I’ll support his freedom of speech, and all that he’s done for everyone’s freedom of speech, endlessly and just… not really enjoy his movies.  I can understand the appeal, especially in the case of Multiple Maniacs, but even then certain scenes go on for way too long and the intentionally-bad aspects can wear down a viewer after so long.