My dream has always been to own a movie theater.  And in this dream, I don’t have to worry about ticket sales, attendance, bills or money in any way.  Because it’s a dream.  In my owning-a-movie-theater fantasy, the first movie I always planned on screening was Raiders of the Lost Ark.  Raiders has, to me, always represented precisely the reason why it is that we go to the movies.  We go to the movies for different reasons.  We see comedies to laugh.  We see dramas to cry.  We see horror movies to scream.  We see movies like Raiders of the Lost Ark to experience the full spectrum of human emotion on display, wrapped in an essence of pure fun. 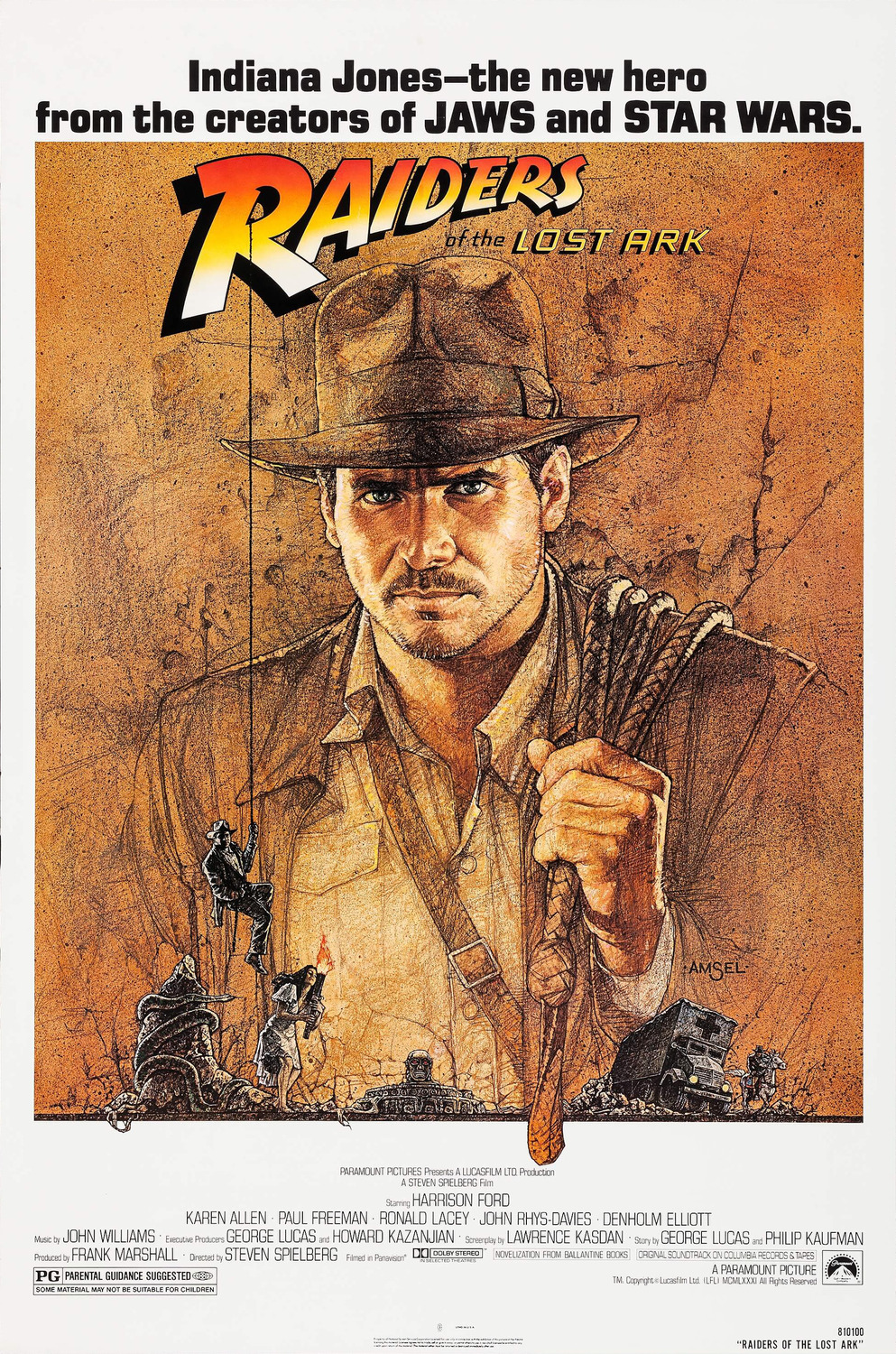 In case you’ve somehow never gotten around to seeing this movie, it’s about the coolest college professor of all time, Indiana Jones, who triples as a part-time antique collector and battler of Nazis.  A movie’s opening introduces us to the action, the characters and exactly what it is that this movie is supposed to make us feel.  Raiders‘ opening is pure magic, one of the most magnificent openings of all time.  We open on the jungles of South America.  It’s hot.  It’s humid.  It’s pre-WWII.  Three mysterious figures trek through the thick of the rainforest in pursuit of we know not what.  Sweat beads their brows and betrayal strikes, but the mysterious fedora-wearing silhouette is no naive explorer and anticipates this.  He steps out of the shadows and emerges as… Indiana motherfucking Jones.  Golden skulls, angry natives, rolling boulders and yet another betrayal follow.  But this is all in a day’s work–or a day’s pastime, rather–because the next we see of him after his miraculous escape is a normal, humdrum life of an academic teaching a class.

Spielberg has made more “important” films in his tenure as director.  He showed us the horror of the Holocaust in Schindler’s List.  He showed us the price of revenge in Munich.  He showed us the absurdity of the legality of slave ownership in Amistad.  But, Raiders of the Lost Ark represents Spielberg at his best and his purest.  He’s a storyteller by nature and has a million things that he wants to throw at us, so with an idea hatched by George Lucas and fleshed out by Lawrence Kasdan, he has an opportunity to do whatever he wants and embellish whatever elements he wants without seeming like a ham.

Years ago, during summer when TV shows used to be nothing but re-runs, I remember flipping through the channels and stumbling across the very beginning of Raiders of the Lost Ark.  It was right at the part where Indy and a young Alfred Molina were making their way through an ancient temple and I was psyched.  Network television at an afternoon hour finally paid off.  For all the bullshit you have to drudge through, at least PBS was playing Indiana Jones unabridged–and in widescreen!!  I kicked back and relaxed, only to have the film dissolve and have Harrison Ford sitting in that classic black-background-and-table set with Charlie Rose asking him inane questions.  It was about as depressing as Bart Simpson being forced to watch, ugh, Klassic Krusty (“Now, are we in the middle of an economic crisis?”  “Well, Krusty, that depends on how you define ‘crisis.’”).

A great film critic once said that a movie isn’t so much it what it’s about, but how it’s told.  If this is true, the somewhat rudimentary of exposition should be ignored in favor of how Raiders of the Lost Ark continually moves the plot forward until it reaches its macabre climax.  A great filmmaker once said that a great film is as easily explained as a movie containing three great scenes and no bad ones.  If this is true, Raiders, features the enigmatic beginning with three lone souls that climaxes with a rolling boulder, the chase scene that rivals anything in Bullitt or The French Connection, and the fabulous ending involving melting faces and exploding heads.

Raiders of the Lost Ark represents, in a way, the best impulses of a filmmaker who has freedom of total control over his/her movie.  It represents a desire to tell a story in the most unabashed manner possible.   John Milius would represent the opposite end of the spectrum: Wanting to express one’s innermost desires before story and all else.  Spielberg’s Raiders represents an almost child-like innocence to tell a story that appeals to broadest audience possible and succeeding at it.

Indiana Jones saves the day in the end through pure machiso and intellectualism.  He represents a male fantasy of what it means to be a man, someone who can effortlessly stomach a kill-or-be-killed world and excel at it.