You know how sometimes you’re thinking about life in general and you think about getting older and how, one day, the celebrities you grew up with when you’re a kid will eventually die sometime in your lifetime?  Never, never, not in a million years did I ever think I would live in a world where Robin Williams of all people would kill himself.

The thought of such a thing actually happening hurts my heart and makes me immeasurably sad.  I can’t believe it.  I can understand it and I can accept it without judgment, but holy fucking shit does it hurt my soul. Let’s say you’re not a huge fan of Robin Williams or his work.  His screen presence can be abrasive from time to time.  But, his work was so wide and varied that I honestly to believe that he’s made something for everyone.  Below, are my favorites:

When you think about the plot of Mrs. Doubtfire for more than 10 seconds, you realize just how goddamn creepy it really is.  You know what?  It doesn’t matter.  It doesn’t matter because Mrs. Doubtfire’s plot is inconsequential in the greater scheme of what the movie set out to accomplish:  Showcase Mr. Robin Williams at the top of his abilities and get him to play as many different characters as possible, with silly voices, funny wigs and whatever else they felt like doing.  The filmmakers and Mr. Williams himself had free license to whatever the fuck they wanted and it was genuinely, genuinely funny.  Who doesn’t love seeing Robin Williams in drag pelt Pierce Brosnan with a lime to the back of the head?

When it comes to Serious-Face Robin Williams, I think most people go to Dead Poets Society, which I thought was a fine film, but didn’t really do much for me emotionally.  My jam is Awakenings, the true story about a group of people suffering from a horrifying disease that leaves them in a limbo where they’re never really quite awake or really quite asleep.  Robin Williams kicks ASS in his role and balances so many emotions, he looks like an old pro.  He holds his own against Robert De Niro and the whole movie is just incredible to watch.  Penny Marshall got a lifetime pass for this movie, which is the movie I use to forgive her whenever she makes a weird misstep.  It’s a friggin’ masterpiece.

Some people say Hook is Spielberg at his whimsical worst.  Other people say it’s a must-see for anyone who grew up with it.  Me?  I think it’s a solid, flawed movie that had enough going for it that I can overlook its structural and script problems and enjoy it for what it is:  A new take on the classic Peter Pan story that coasts by on the charm of Robin Williams, the effortless integration of childhood angst by Steven Spielberg, and really, really fun special effects.  Parts of the story sag like hell but, come on man, it’s a blast to watch and… it’s charming! 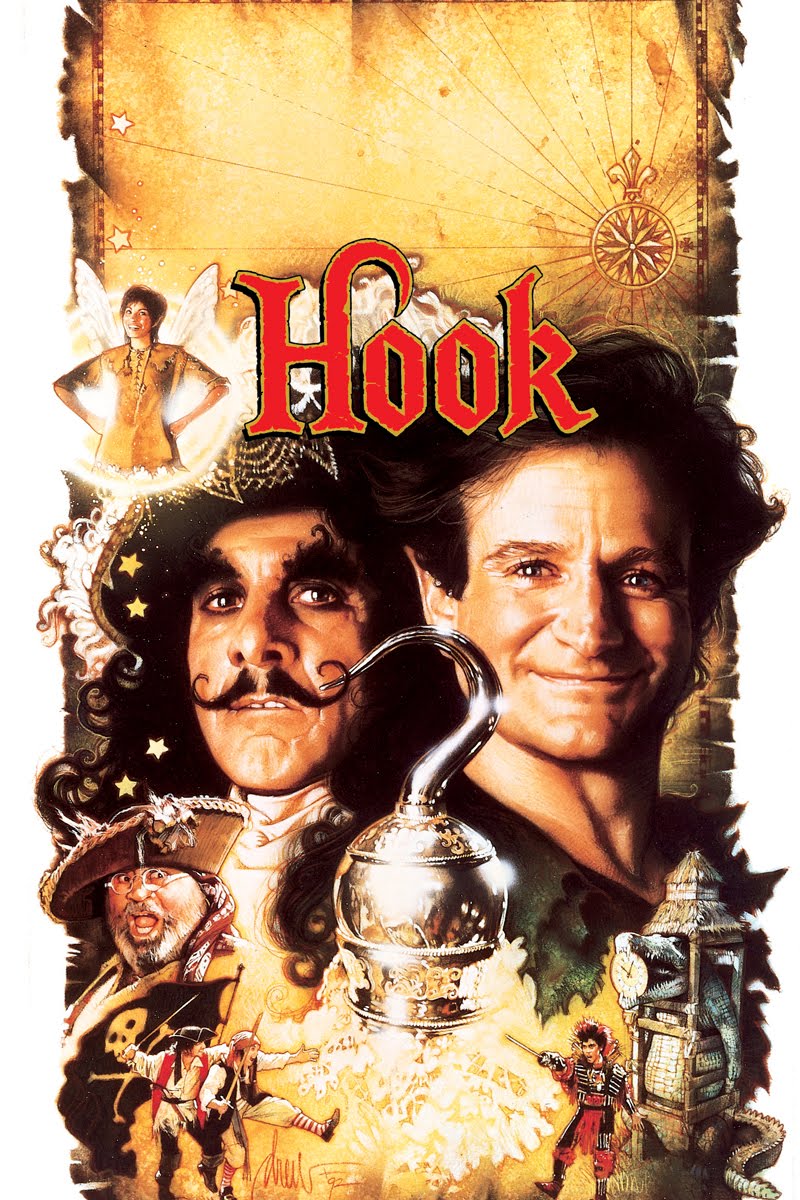 I’m one of those people where, so often, no matter what, I’m like, “Oh! The original was so much better!”  And that’s because I’m a defender of original ideas and I hate the idea of coming in and taking someone else’s hard work, polishing it yourself and making money off of it–when, man, it’s not yours!  But sometimes, a remake is just, fuck, it’s just so good.  The Birdcage, like The Departed or The Thing, take the original storyline and really expand upon it.  Robin Williams in this movie, I think, is the funniest he’s ever been.  He’s more subdued, he’s just watching this situation around him crumble and the way he reacts to it all is seriously comedic gold.  Nathan Lane’s performance is the most ostentatious and quotable (and really is hilarious) but Robin Williams does so much so subtly that you know that you’re watching a master.

Also worthy of mention is his cameo appearance in To Wong Foo.

I don’t give a shit, man.  Aladdin is awesome.  And it only got better when I read the fan theory that the world of Aladdin actually takes place in a post-apocalyptic wasteland and NOT the past, which explains why Genie knows so many contemporary (to us) pop culture references.  The thing is, the movie is just good fun.  The songs are good.  The animation is solid.  Robin Williams as Genie is the real reason for coming though.  His rapid-fire delivery is made for cartoons and it’s clear that he’s having a blast.  There were problems with this and that and money bullshit after it all wrapped, but when it came to recording the voices, you could just hear the excitement boom out.  It’s a ton of fun to watch.

I just don’t think it’s possible to dislike a movie that has original songs written by Elliott Smith and the score composed by Danny Elfman.  Good Will Hunting can be sappy as all hell, but it’s a solid ride.  Matt Damon is charming in it.  The script is, you know, it’s totally script-y, something where it feels totally written and the authors (Damon and Affleck) are pleased totally, but it’s good, it’s good fun.  Robin Williams’ role in it, which I guess is mostly adlibbed is the one real performance in the movie, which is to say he comes in like an old pro and every scene he’s in, he knocks out of the fucking park.  Ben Affleck and Matt Damon are finding their chops, and Robin Williams is like, “I got this shit, kids,” and delivers exactly what the role needed and what the movie needed in general.  He was that voice of wisdom that was effortlessly funny and charming.

Every actor who’s known as being funny and charming has to take that one role where they play someone that totally deconstructs what you know about them and they play a total creep… but it doesn’t work if you’re only slightly creepy.  You have to do such a good job that everyone maybe reconsiders you and goes, “Huh… maybe he IS creepy.”  That’s when it’s successful.  Robin Williams as Seymour Parrish, the lonely and obsessed man, is totally great.  The movie itself is solid, too; not perfect, it has its flaws but as a viewer you’re watching this movie to see Robin Williams experiment, and totally succeed, with a role he’s not known for playing at all.

In the hands of a lesser director, The Fisher King could have been total bullshit.  Terry Gilliam doesn’t make whimsy for the sake of being cutesy or out of a desire to perpetuate an image.  The guy has an active imagination and, especially in his earlier work, created amazing worlds that were wholly unique to himself and his own vision.  Robin Williams is perfectly cast and received an Oscar nomination for best supporting actor as Parry.  The blending of the real and the surreal and the fantastical is something that only people like Terry Gilliam should play around with, because it has to come from your heart and just making it as a “just because” doesn’t feel genuine.  Here, the heart is totally true.