The story behind the production of Roadracers is that it was a part of Showtime’s Rebel Highway–this sort of revival of AIP movies that were popular in the 1950s, now with a 1990s sensibility.  Armed with a budget of only $1.3 million, and a production of 12 days, established directors (like Joe Dante, Jon McNaughton, William Friedkin and John Milius) would have total freedom to make a small, low-budget movie that would premiere every week, for a total of ten entries.

For most of the directors involved, it was a chance to actually have fun making a movie, since the stakes were so low.  The budget was low and it was, more or less, a vehicle to showcase up-and-coming acting talent.

That is, except for Robert Rodriguez.  Prior to this, his only other directing credit had been El Mariachi, the movie he had famously made for only about $7,000.  For him, doing an entry for Rebel Highway was the first time he’d ever worked on a film with a budget of that size, and he set about to make Roadracers as good as he possibly could within his 12-day limitation.  He was the only filmmaker employed who really had something to prove.

David Arquette stars as Dude Delaney, a young punk who loves rock-n-roll (specifically Link Wray), grease in his hair, his girlfriend Donna (Salma Hayek in one of her very first film roles), and fucking with the corrupt local cop, Sarge, who’s played with a tremendous amount of scenery-chewing by William Atherton.

John Hawkes, who plays Dude’s buddy Nixer, looks baby-faced as all hell in this movie, appropriately so as he’s playing a teenager, but in reality he was just about 35 years old when he’d made this movie.  When Nixer isn’t helping Dude get in and out of trouble, he’s at the local movie theater watching and re-watching Invasion of the Body Snatchers.

“It’s not a saucer movie,” He tells the box office employee he has a crush on.  “It’s a warning.” 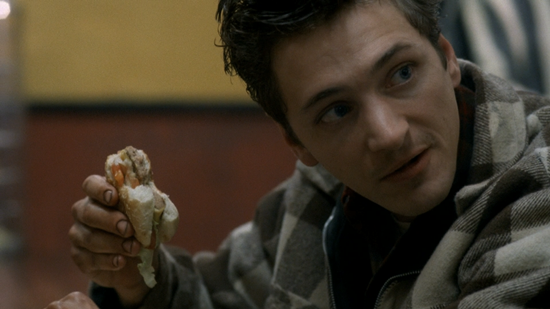 Salma Hayek does a great job and it’s clear why Robert Rodriguez chose to work with her again right after when they made Desperado together.  Her role is pretty limited, but as far as throwaway girlfriend characters in these kinds of flicks go, she does a lot with it.  She even gets to kick the shithead son of the corrupt cop in the face.

Roadracers exists in this world unto itself.  The world it lives in is like a movie within a movie, or a dream within a dream.  It’s the kind of movie a character in another movie would sit down and watch.  It’s less interested in telling a story and more interested in show-offy camera techniques and just existing and being cool.  And it is cool.  The movie is effortlessly cool and it knows how to achieve this, through smokes and leather jackets and sawed-off shotguns and bloody revenge.  Drag races and rockabilly are already cool and all, but not really, really be cool, you’ve got to kick it up to the next level.

Hell, this movie even makes drinking milk look cool.  What you gotta do is chug it while drenched in blood a la Bruce Campbell at the end of the first Evil Dead and throw it down and make sure it shatters on a table below.

Robert Rodriguez edited as well, and it’s clear that he’s having a lot of fun playing with different techniques to ramp up tension–such as the scene that cuts back and forth between the Donna being sexually and racially harassed by the local cop’s wicked son and a rock-n-roll tryout with a man frantically switching instruments between a saxophone and an electric guitar.

For this early outing, a lot of Robert Rodriguez’s trademarks were already on display, which he would later perfect over the years, like combining genuine tension with puerile humor.  In a scene, a fight breaks out and three switchblades are drawn, one directly at Dude’s crotch.  You’ve also got hyper-kinetic camera work coupled with staccato editing… without overuse or disorientation, it’s not like watching a Michael Bay jack-off-a-thon.  There’s always coherence in an action scene directed by Rodriguez.

Roadracers, at its best, reminds me or something a young John Carpenter might have played a part in, so perhaps it was appropriate that it was produced in part by Debra Hill.

Some of the production is detailed in Rodriguez’s book, Rebel Without a Crew and in it he talks a bit about how quickly the crew worked in order to achieve so many camera setups in one day.  Aside from that and a little bit of conversation here and there, Roadracers is sort of a neglected little gem.  It’s an enormous amount of fun and should be wider-known.  It’s almost a shame that it’s not wider-known, but part of the fun is finding and discovering movies like this.