After The Exorcist, the film, came out in 1973, studios and filmmakers were in a mad rush to capitalize on its success. If you look at any given horror title from ’73 through to about ’76, it might have to deal with demonic possession or Satan or some sort of ritualistic anything that could link itself stylistically or thematically back to the granddaddy of them all The Exorcist.

But, in 1972, the book was a hot property, too. And before the slew of imitators that appeared in the movie’s wake, a little-seen movie made that same year was made to retroactively cash-in on the movie’s success. That movie was Something Evil. The story itself is rather simple, and simply told. A married couple (played by Darren McGavin and Sandy Dennis) move into a house, a lovely house out in the country, that is infested with demons. And the demons want to destroy the family, wrecking their emotions and turning them against one another, before finally possessing the soul of their little boy (played by Johnny Whitaker, a famous child star at the time). 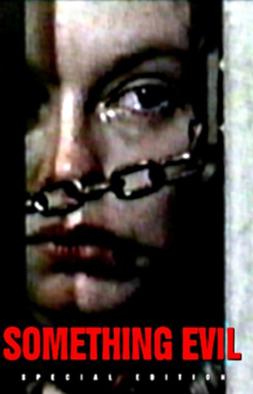 This is a forgettable, cheaply made made-for-TV flick, but what’s interesting about it is that it was directed by a post-Duel Steven Spielberg. Duel put Spielberg on the map as a director to look out for, and Something Evil gave him a chance to play with his craft and hone it, shaping some of the themes that he would use throughout his oeuvre: The strong family, juxtaposing classically-framed Americana with something darker, and impressive camera work that isn’t show-offy, per se, but adds a certain layer to the overall atmosphere of the story being told.

Watching a film like Something Evil makes me wonder why Spielberg didn’t return to horror more often. He made Jaws, and he supposedly directed Poltergeist for a coked-out Tobe Hooper, but he’s a natural at it. This is the only time in his filmmaking career, as a director, not as a producer, that is strictly supernatural horror, intended not as an adventure, but as a story to produce chills in the viewer. And, largely, it works. Some of the budgetary restraints provide some unintentional laughs, like one in which a car’s windshield cracks and it’s clearly drawn on the film, but with a more relaxed schedule and a bigger budget, Something Evil could have held its own–not against The Exorcist or anything, but it could have been just as memorable as, say, the original Amityville Horror. Hell, even the “spooky eyes” scare here works better than it did in Amity, and it was made a whole 8 years earlier (6 years earlier than the book).

Like so many other movies of this type, what leads to some of its undoing is a limp attempt to rationalize the nature of the evil. Everything that happens, there’s an explanation for it in some book somewhere. This means this, and that means that. Horror, to me, is better left undefined. Demons come from a realm incomprehensible to human minds and being able to define their motivations just seems unnecessary. They want to make us miserable and are incredibly good at it, why define it any further than that?

The cast does well with the material and it treats itself with a deadly seriousness. No, Something Evil isn’t a classic, or something you have to rush out and see right now, but it’s worth watching as a study in filmmaking itself. It’s interesting to see a director work outside of his comfort zone and create a film he’s never made before or since. It’s interesting to see the kinds of tools he’d employ later on, before those techniques were perfected, and actually sometimes flounder at it and fail. It helps you realize that everyone is capable of doing less-than-stellar work as a sophomore director, and even the most genuinely-born talented folks need practice. Not that Something Evil is a failure, really, it was just that it had a lot of potential that it never quite reached.

For a low-budget made-for-TV movie that was a rip-off of The Exorcist before The Exorcist, it’s actually quite good. The best scene is a long-take through a party, employing some multiple sides of dialogue in the same vein as Robert Altman.

You can watch the full movie here, too: