The best part about Tarantino’s legacy as a filmmaker is that he gets even the most casual of film-goers to give a shit about something like a 70mm presentation of his most recent film, even if the bulk of the action takes place inside a single location. But, he has a sincerity about his decision to dust off an antique set of lenses. He wants to play with an old toy and, by god, he’s going to do it whether we as an audience want to watch it or not.

Given that in a single weekend with a limited opening in only 98 theaters, the film has already grossed $4.5 million, audiences absolutely will watch him play. 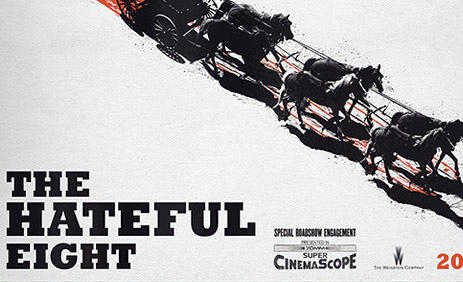 The Hateful Eight is Quentin Tarantino’s ugliest film since Reservoir Dogs. And, like Reservoir Dogs, the bulk of the action is contained to a single location, with flashbacks (some real and some blurring the lines between lies) fleshing out the characters’ motivations. It’s ugly in how the characters treat each other and in the enormity of violence and profanity that drips and bubbles off of the celluloid.

John “The Hangman” Ruth (Kurt Russell) with a bounty in tow (Jennifer Jason Leigh as Daisy Domergue) stops on a snowy road, hours before a blizzard roles in, and against his better judgment, helps a fellow bounty hunter–played by Samuel L. Jackson–who has three corpses with him. The Hangman takes all necessary precautions before letting Jackson’s Marquis Warren into his wagon.

The blizzard grows and grows in its intensity and the visibility grows more and more obscured. Ennio Morricone’s music builds in its ferocity and the trail itself becomes some sort of Stygian trek into the mouth of madness. John and Marquis stop once more on the road, to pick up an idiotic, foul-mouthed racist named Chris Mannix (Walton Goggins) who may or may not be the newly-elected sheriff of Red Rock, the town where Daisy Domergue is set to be tried and then hanged if found guilty.

Their last stop, and one of the last times that we, the viewer, will set foot outside, is at an old inn along the way. What happens next is drenched in blood, betrayal, lies, oral rape and revenge–cold-hearted, animalistic revenge.

Joining the cast on the inside of the cabin are Tim Roth, Michael Madsen, Demian Bichir and Bruce Dern. At least one of them is hiding a secret about the captured woman bound to the Hangman. And I wouldn’t dare reveal who.

Because of Cinemascope’s extra wide format, Quentin Tarantino gets to play with the space and staging of his play (and that’s pretty much exactly what this movie is). With dual-focused lenses, he gets to portray a lot of action in one single framing. Not that he’s in any hurry to tell the story, mind you. A movie that takes place on one stormy night with a limited cast of characters takes three hours to tell. But, that’s the kind of creative freedom you’re allowed when you’re Quentin Tarantino. You get to use an epic scope in a claustrophobic space, with a gargantuan running time. You get to film a western remake of Reservoir Dogs and insist on the type of format used for Ben-Hur.

Ennio Morricone composed the first western score he’s written in just about forty years for The Hateful Eight and it’s Quentin Tarantino’s first film–ever–to have an original composition written for it. Honestly, it’s a match made in heaven. The musical selections are so good. Morricone even got to recycle his unused symphonic score written for the other Kurt Russell-starring movie set in a whiteout of snow: The Thing. John Carpenter had scrapped it in favor of a synthesized score, but it’s great to hear it here and come alive with a full orchestra.

The cinematography is, and this goes without saying, just beautiful. It’s fantastic to look at.

The Hateful Eight is also, gleefully, about something. In a season of movies that are ostensibly “about” this or that, but are really about spectacle or sci-fi extravaganza, it’s refreshing to see a movie that has an opinion about the history of America, in all its ugly glory. I’ve said earlier that The Hateful Eight is an ugly film (and it is, in its emotions and portrayal of violence), but it’s also deeply disgusted with its rather factual and matter-of-fact look at violence and death.

One thing that bothered me about this movie had nothing to do with the movie itself. Rather, the audience I saw the movie with. In the movie, a character would shout something to Jennifer Jason Leigh’s character, and smack her, and the audience would howl with laughter. They would hoot and cheer and jeer. The movie would show her getting pistol-whipped and she would look directly into the camera and a trickle of blood would ooze down the side of her face. And the audience would clap and holler. It made me feel, frankly, sickened. This was a movie that I felt had been made with a pretty clear point about misogyny, racism and violence and its prevalence in America, and the American audience embraced and loved what they were being shown. To be honest, it made me sad.

The more I’ve thought about it, the more I’ve determined that The Hateful Eight is an important movie for American cinemas this year. By god, I want it to spur conversations about what it showed its characters acting out so callously and why people reacted to it so giddily. In a year where “Black Lives Matter” support has earned the police department the ability to vaguely threaten a filmmaker for exercising freedom of speech, it’s most important now to have a conversation about violence in America. We need to talk about why it’s funny to see a woman get slapped around and have her teeth knocked out.

I saw the roadshow version of The Hateful Eight and I was glad that I did, to get to see it presented as something of a special event–to see it on a nearly-extinct format–and watch the strings be pulled with anticipation and how much manipulation went into the subversion of expectations. Quentin Tarantino is as good as a director as he is a writer and he’s at the top of his game here. Once again, he’s made one of the best films of the year.

Expect to see much debate about this movie’s worth as it does (of course) contain liberal use of the N-word, sickening violence, nonstop violence against women, but is wrapped in a very pretty package that balances comedy and drama. It’s as funny as it is intense or emotionally wrenching. It’s not expected to be for everyone, because it is, by design, incredibly controversial. You can either watch the film and decide that the director is a racist misogynist in love with violence, or you can watch the film and decide that the director hated racism, hates misogyny and is repulsed by the idea of violence coming to the victims of those outdated ideals.

To me, it’s one of the best movies I’ve seen all year. A cynical, bleak, quasi-nihilistic masterpiece.