The Invitation begins with a car ride to a dinner party. Will (Logan Marshall-Green) has gotten an invitation from his ex-wife, whom he has not (nor has anyone else) seen in two years. He and his new girlfriend, Kira (Emayatzy Corinealdi), travel together and along the way, a bad omen begins the night: They accidentally run over and mortally wound a small coyote that Will has to mercifully put out of its misery, lest it suffer.

The awkwardness of the evening only intensifies from there. Will and Kira meet his ex-wife Eden (Tammy Blanchard) and her new lover David (Michiel Huisman), and a house full of guests to celebrate Eden’s breakthrough in coping with misery. We learn that she and Will had had a child together who died. Both of them had different ways of coping and their relationship crumbled. Eden’s way of coping was by joining a group that seems terrifyingly like a cult. 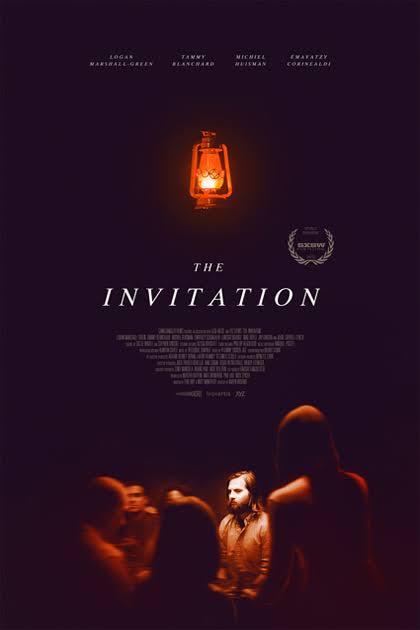 Will seems to be the only one to think Eden and David are acting strange. He begins the night with suspicion–he sees his ex-wife with a bottle of pills and investigates, out of concern. Is she popping pills recreationally? No one seems to pay much mind because they seem to just be glad that she at least made some sort of progress forward, instead of continuing with her withdrawal from society and her closest friends.

A movie like The Invitation depends on its ability to manipulate an audience.  It has to keep an audience on its toes and second-guess what each setup means.  Early on, we learn that an unseen character may or may not have arrived before everyone else.  What happened to them?  Were they killed?  If we know outright or have our suspicions confirmed, that suspense is killed.  Instead, The Invitation (almost brilliantly, I’d say) toys with those expectations, subverting some, confirming others.  Why the closeups on the wine?  Is it’s Will’s own fears or is something actually wrong?  I don’t know about anyone else who saw this, but I found myself questioning myself again and again.  This is one of those “I predict!” kind of movies where you say, “I predict, blah-blah-blah…” and see what you got right.  I got, I think, one thing right.  The movie knows the language of film, so it has a keen ability to take a different turn.  The very, very climax is perhaps too predictable, but it’s well done.

A movie like this also requires a certain amount of suspension of disbelief, but by and large it earns those moments.  A character that no one knows (John Carrol Lynch, a fantastic character actor) essentially introduces himself to everyone at the party by telling them that he killed his wife.  When he finishes someone says, “What the fuck?” and I found that to be an earned moment of some realism.  Shortly after, something else mildly strange happens and one of the attendees decides it’s time to leave.  And she does.

I don’t know how many of these “dinner party” movies I’ve seen, but they’re rarely good.  The Invitation is.  It’s very good, as a matter of fact.  It’s masterful horror movie that kind of has a weak third act (a weak third act with a fantastic ending, though).  It does require a lot from the viewer though.  I thought the first ten minutes or so were a chore.  Some of the acting from the bit players was woefully bad.  I mean amateurish, bad acting.  But after the movie seems to hit a stride, everything improves drastically.

Compare a movie like The Invitation to a movie like Coherence.  In Coherence every character is terrible.  In either movie, you don’t know what’s going to happen, but you know it’s going to be awful.  In Coherence you actively hope it happens.  In The Invitation you hold out hope that whatever happens ends up being a big misunderstanding.  That’s the key to success when it comes to suspense:  Setting up characters you hope make it out okay.  Without that, you’re twiddling your thumbs and just waiting.  You’re not engaged.

I’m not saying all characters have to be likable.  How boring would that be?  Some of the greatest characters are villainous and awful and irredeemable, but there’s a way to draw from that.  You need a balance, and this movie pulls it off.  Many of these characters in this film (most of them, even) are self-absorbed, head-in-the-clouds rich hipster types who revel in narcissism.   But we actually get to know them, and that’s the difference.  If you get to know somebody, they can become a lot less off-putting.

The Invitation was directed by Karyn Kusama and this movie is her masterpiece.  She’s done bigger movies (Æon Flux) and she’s done gorier movies (Jennifer’s Body), but this is the first successful outing of hers that I’ve seen.  Everyone has a specialty, and I think she’s found hers.  She’s a master at talky suspensers.  I would love to see her at it again and do something else like this, because it was a blast.