It’s not exactly a new thing in modern film to make a movie completely in the style of something from the days of yore, to make something that looks and feels authentically retro.  Lots of movies attempt this and only a few can ever successfully pull it off.  The trick is, you have to believe in the style that you’re creating.  It can’t just be a gimmick.  It has to be something where the style of the film is integral, where the movie couldn’t possibly exist if it were told in a more straightforward fashion. 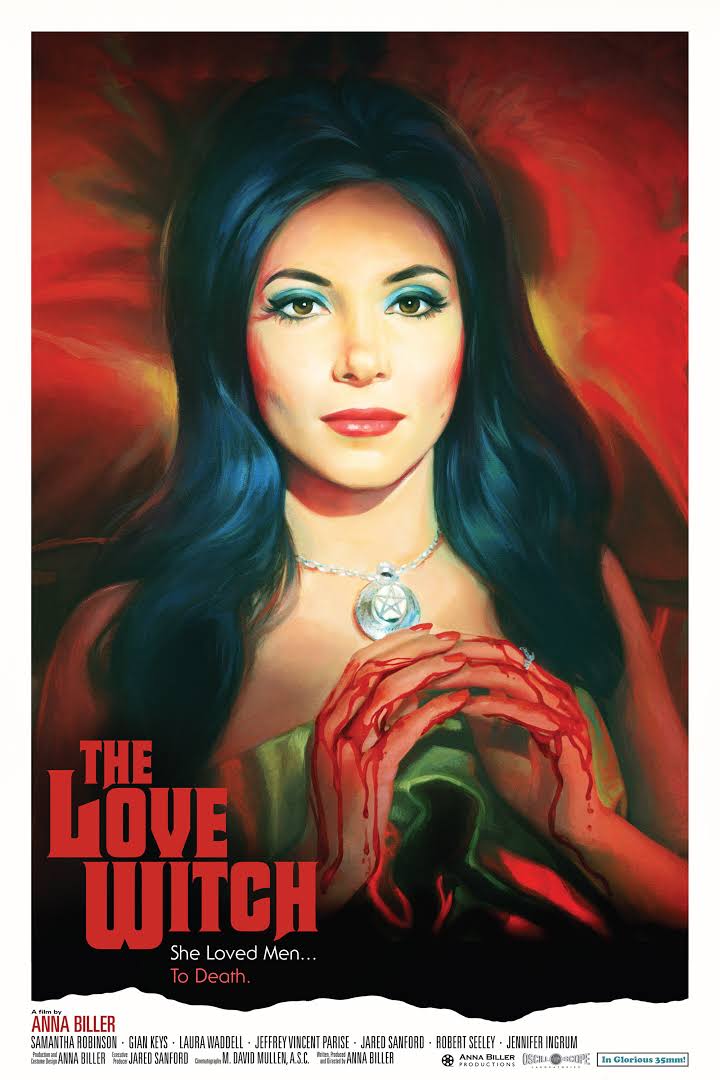 And so The Love Witch is a movie that owes a huge debt of gratitude to the look of the 1960s, with generous homage to some of the more liberal, nudity-laden films of the 1970s, where the newly-found freedom of not being held back by a censorship board was immediately embraced by filmmakers.  And the look and feel of The Love Witch is integral to the film.  If it wasn’t told the way that it’s told, it wouldn’t have the same impact.  About 80% of its charm would be lost.

The story follows Elaine (Samantha Robinson) who is relocating to a new town after the death of her husband, who seemingly died from just loving Elaine too much.  She immediately gets to work on a new concoction and finds similar results when another man that she hooks up with becomes terrifyingly clingy to her after ingesting her potion and then dies the next day of heart failure.

Elaine also seduces the husband of her landlady after feeling jealous of their long-lasting relationship.  Her motivations for finding a perfect love that loves her as much as she does them doesn’t ever seem to be rooted in a need for actual love, but in pettiness, revenge and pure vanity.

Her activities, both with men falling in love with and dying over her and her activities with a local coven of witches, naturally attract some unwanted attention to her from the law and Officer Griff (Gian Keys) looks into her involvement with the mysterious death of one of her suitors.  But when they meet up, could this be actual love?  Or could it be more heartbreak waiting to happen?

Somehow, The Love Witch is even more ridiculous than it sounds.  The way I recapped the plot in the most basic of ways almost makes it seem straightforward.  It’s not, and that’s part of what makes it fun.  The writer/director (Anna Biller, who was also responsible for much of the art direction, costume design and set design) is clearly having a lot of fun with her creations and never takes the goings-on too terribly seriously.  She cares enough about the progression of the story that the audience is drawn in, but divorced enough from reality that when something macabre happens, it can be laughed or shrugged off.

In a way, it reminded me of George A. Romero’s The Season of the Witch, the difference being that The Season of the Witch definitely took itself deathly seriously, and The Love Witch is much more of a fun romp, embracing the magical elements on the fringes of its plot.  But both were stories about witchcraft as a means of empowerment, even if Elaine is, at her core, a villain at worst and an anti-hero at best.

If I have complaint, it’s that The Love Witch, at 2 hours, is far too long.  It could really benefit from some tightening here and there.  Some unnecessary subplots may have been better left on the cutting room floor.  Certain scenes last far too long and their impact is somewhat diminished.  I’m not sure that we needed that many naked séance scenes, to be honest.

The look of The Love Witch is perfect.  It’s certainly one of the best-looking films to come out this year.  The movie itself, while inconsequential, is a lot of fun.  It’s definitely worth a look if it’s playing anywhere near you or if it happens to pop up on a streaming channel you subscribe to.  Anna Biller is a filmmaker with a unique look, something that you can almost instantly recognize as being unique to her.  This is one of those rare times where I might actually be interested in a sequel, to see what strange new places this story could go.