Nicolas Winding Refn has always been a visual storyteller, to the degree that he sacrifices dialogue in order to convey action, mood and emotion through visual cues.  The way he figures it, why say something when you can show it?  Sometimes this works to great success (Drive) and sometimes to mixed results (Only God Forgives). 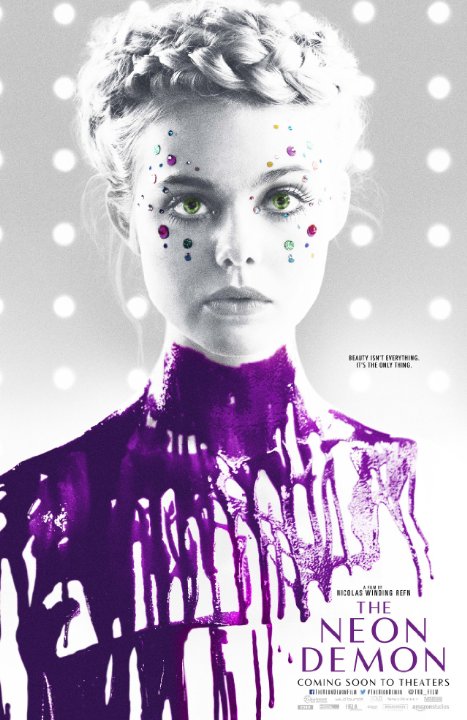 His latest, The Neon Demon, tells the story of Jesse (Elle Fanning), in one of those all-too familiar stories of some hayseed finding success in Los Angeles as a model, with an even more diabolical twist than we’ve ever seen before.  It plays out like if The Valley of the Dolls had a bastard child with Ravenous, with Lynchian and Kubrickian aspirations.

Jesse has a natural beauty everyone seems to be looking for, a certain je ne sais quoi that, to them, to the producers and photographers and agents, is like beauty boiled down to its purest essence.  It drives them mad.  It drives her competition to a murderous rage.  And what happens next in the plot would be considered vaguely as spoilers, if only it sounded real:  We see lesbian necrophilia, wild animals destroying hotel rooms, literal bloodbaths and a waterfall of gore that reminds me of the elevator scene in The Shining if it had been filtered through a perverted mind.

And you know that expression, “This town will eat you alive”?  Let’s just say that Refn isn’t very subtle in this outing.

The Neon Demon is at its best when it allows itself to be weird.  There’s a beautiful sequence where Jesse realizes what she has that everyone wants as she strolls down a runway.  It’s pure psychedelia, with a perfect culmination of music (courtesy of Cliff Martinez, one of the best composers today), set design, cinematography, costume design, performance, direction… literally, just everything about this scene works.  It’s pitch-perfect in execution.

The Neon Demon is at its worst when it tries to tell its story through a more traditional narrative, because as a straightforward movie, frankly, it’s pretty lousy.  The acting—aside from Christina Hendricks and Keanu Reeves, who is actually quite good here—is not good.  It feels like it’s purposefully divorced from reality, like something from a Sophia Coppola film, but without the proper context to allow it.

In a horror movie, we only care about what happens to the main character if we actually care about that character.  Jesse was given no life.  She simply existed.  It makes sense as a metaphorical, stylistic choice in that she represents an ideal or a standard in an empty-headed, corrupt industry that cherishes so-called “beauty” over human life, but the fact that every character was just as thinly-designed made it just seem like bad writing, or an inability (and not a conscious decision) to flesh out the characters.

What happens in the last fifteen minutes or so is mostly effective.  When The Neon Demon becomes the sort of Grand Guignol bit of grotesquerie that it had always been building to, it’s this macabrely beautiful setpiece.  It’s just the rest of the movie that precedes it that’s uneven.

The Neon Demon is destined to be divisive.  Any movie that has a scene necrophilia is going to be, from the get-go.  Whether or not you’re going to like it seems entirely random.  The imagery and the grotesquerie will either win you over or make you want to vomit.  Is the film well made?  Sure, technically.  Is it emotionally engaging?  Not really.  Would I ever watch it again?  Not on your life.

All in all, I sort of liked it.  I hated chunks of it, absolutely adored others, and wish it had been given a few more drafts of a script or something.  Somewhere, The Neon Demon was capable of great things, but too many half-formed ideas made it to the final version that weren’t as great as the other essential ingredients that had gone into its making.  I sometimes think of making a film like making a meal:  The Neon Demon would have been superb as an experimental soup or something, this complex concoction with varied flavors and rare spices.  But when you get it instead of a nice heel of bread it’s like a slice of Wonder Bread and the vegetables are all undercooked.  But the broth is good!  So… it’s not terrible, it’s just I’d rather have something else.